Illustration of Nirenberg’s chart of the 64 3-letter combinations that form the genetic code. An image of his handwritten chart may be seen on the National Library of Medicine Web site. Courtesy of the Office of History, National Institutes of Health.

Biomedical research lost one of its titans recently with the death of Marshall Nirenberg, the Nobel Prize-winning biochemist who, with the help of colleagues at the National Institutes of Health (NIH) and elsewhere, cracked the genetic code in 1961. His experiment showed how RNA transmits encoded information in DNA and directs the building of proteins (the National Museum of American History owns a copy of his chart of 64 3-letter combinations describing all possible amino acids, the building blocks of proteins, and the NIH has an excellent virtual exhibit about Nirenberg’s work).

Nirenberg was the first federal employee to win the Nobel Prize in physiology or medicine. It made him an instant celebrity. While tempted by job offers in academe and elsewhere—they were surely his for the asking—Nirenberg ended up spending his entire career at NIH. He said he just couldn’t see giving up the freedom they gave him to pursue his research. 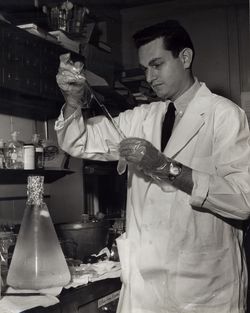 Nirenberg performing an experiment in his lab at NIH around 1962. Courtesy of the Office of History, National Institutes of Health.

I had the privilege of meeting this quietly modest man a couple of times, as NIH is just just up the pike from the museum in downtown D.C. That’s Rockville Pike, the spine of the so-called I-270 biotech corridor, but Nirenberg worked there long before the region acquired its current moniker. The area’s great research organizations, like NIH and the nearby National Institute of Standards and Technology—which has garnered its own share of Nobel Prizes—are cornerstones of the new technology corridor. But they rest on over a century of institution building, both private and public.

Federal science agencies tend to treasure their Nobel laureates. It’s the sort of thing that private industrial research labs used to do, but say they can no longer afford. We are fortunate indeed that government agencies like NIH continue to do the far-horizon research that launches and sustains our nation’s high-tech networks, the incubators of new technologies. A clear case, in my view, of government money well spent.

Arthur Molella is Jerome and Dorothy Lemelson Director of the Lemelson Center for the Study of Invention and Innovation at the National Museum of American History.