The stress. The mental focus. Getting your mind "in the zone." Fear, worry, doubt.  The waiting! The anticipation! With the high drama attached to the Olympic games, what's happening in the minds of the athletes gets a lot of attention from commentators.  But I'm not going to focus on heads; I'm going to call your attention elsewhere—to the athlete's feats.  I mean, feet.

The roughly 6,000 objects in the museum's sports collections bear witness to the vital place of sports in the nation's history.  A special case now on view in the National Treasures of Popular Culture exhibition features artifacts related to Olympians, including one champion you may have been hearing a lot about in the last week.

With a new silver medal in the 1500m and bronze in the 1000m, speed skater Apolo Anton Ohno has become the most decorated American athlete of all time in the Winter Olympics. 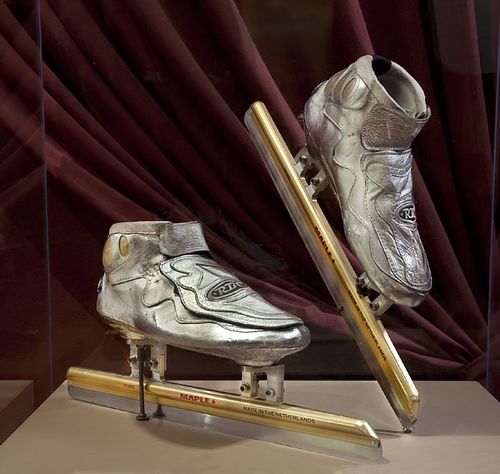 Ohno wore these oh-so-shiny skates in the 2002 Olympics. (Currently on display in the museum.)

If you watched the 2007 season of Dancing with the Stars, you know that Ohno is a multi-talented athlete.  But did you know that before he was an Olympic speed skater, he was a national champion and record-holder for indoor in-line skating? 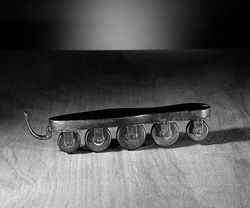 In the days before the invention of indoor rinks, dedicated ice skaters turned to the in-line skate, the "Volito," when they needed to practice but couldn't find ice. This in-line skate consisted of a wooden sole, a single row of five wheels, and a curved iron bar at the front that served as a rudimentary brake. What made the Volito superior to other models was the unequal size of its wheels—larger at the center and smaller at the ends. This simple modification allowed the skater to execute turns more easily.

While he probably didn't practice with the Volito, U.S. and world figure skating star Brian Boitano showed the world how to execute turns when he introduced his signature jump, the "Tano triple lutz" (performed with one of the skater's arms up in the air, rather than tucked in to his chest.) The next year Boitano dueled Canada's skating champion Brian Orser for the gold in the 1988 Winter Olympics, a clash of skating titans laced with the drama of the legendary rivalry between the U.S. and Canada. Figure skating, an Olympic event since 1908, had developed into one of the most anticipated events in the Games and a centerpiece of television coverage.  In the end, Boitano unleashed a spectacular long program that bowled over the judges and brought home the gold, while Canada's native son took the silver.  The "Battle of the Brians" became Olympic legend. 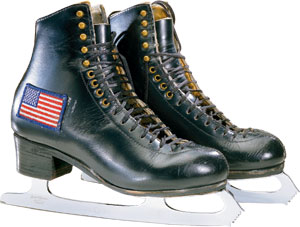 Boitano wore these Harlick skates in the 1988 Olympics. The boot company added the American flags for good luck. (Currently on display in the museum.)

Ohno's speed skates and Boitano's ice skates join other artifacts from the Winter and Summer Olympics in the special exhibit on view in the museum, including one of Bobby Morrow's three Olympic gold medals, Nastia Luikin's leotard, and an Olympic torch from the 1984 Summer Games. 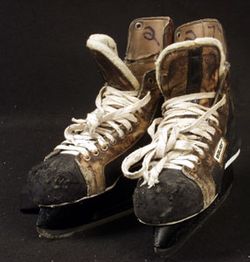 But let's not stop there.  The museum has more Olympic footwear in store for you.  Definitely on the scruffier side, compared with Ohno's glitzy pair and Boitano's stars and stripes, are these hockey skates used by Phil Verchota, a member of the legendary 1980 U.S. Hockey Team.

Since 1956, teams from the Soviet Union had dominated Olympic ice hockey, and they were the overwhelming favorites in 1980. The unlikely Americans handed the Soviets one of the greatest upsets in Olympic history. The defeat of the Soviet team in the semifinals—known as the "miracle on ice"—captured the hearts and imaginations of Americans during a time of cold-war tensions. 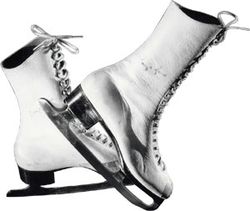 Ice skates autographed by Henie, about 1945. White skates were one of the many trends popularized by the first celebrity skater.

The next pair, a set of chic white skates, belonged to a woman who wasn't just an Olympic champion but also a Hollywood film star.  Sonja Henie parlayed her skill and glamor into a career as one of the world's most famous figure skaters—in the rink and on the screen. Henie, winner of three Olympic gold medals and a Norwegian and European champion, invented a thrillingly theatrical and athletic style of figure skating. She introduced short skirts, white skates, and flirtatious moves. Her spectacular spins and jumps raised the bar for all competitors.

That's all for fancy Olympic footwear but there's plenty more sports history for you to enjoy online. If the Winter Olympics are your bag, be sure to check out Bonnie Blair's speed skins and Kristi Yamaguchi's skating dress in our online exhibition,  Sports: Breaking Records, Breaking Barriers.  The site portrays athletes from more than a dozen sports, including artifacts from Summer Olympians Gertrude Ederle, Bill Russell, Mia Hamm, Owen Churchill, Lance Armstrong, Muhammad Ali, Rebecca Lobo, and Dominique Dawes.  You'll also find books and films about Olympians for adults and children.  Or mine our online collections database for sports and leisure objects, which includes everything from boxing gloves to NASCAR racing cars.