A teacher's perspective on the Greensboro Sit-In Youth Town Hall

Editor’s note: This post was written by Amy Trenkle, a middle school teacher in Washington, D.C. She and her students—along with 200 other young participants—were invited to attend a program at the museum in which the three surviving members of the Greensboro Four were interviewed about their bold action that ignited student involvement in the Civil Rights Movement. 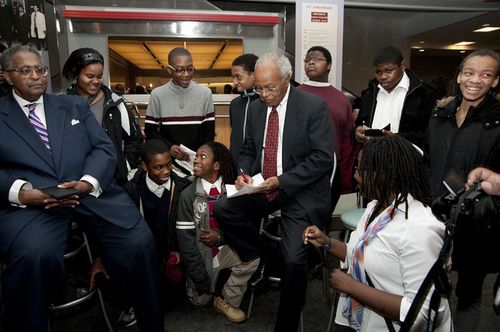 Students from Amy Trenkle's middle-school class, Franklin McCain (left), and Joseph McNeil (right) had a chance to meet and pose for photos in front of the lunch counter on display in the museum.

I was so excited to learn that my students and I were invited to the Youth Town Hall: Celebrating the 50th Anniversary of the Greensboro Sit In. Of course, I jumped at the opportunity to have my students attend! My challenge was a) how to narrow it down to select students and b) how to prepare them for this great opportunity!

I decided to open up the opportunity to any student who was interested and asked them to write me a letter as to why they would like to attend.

CJ wrote, “I really would like to go on this trip because I see myself always wanting to do what is right for others and to be able to feel what they felt . . . will be an experience I will not forget.” He continues: “My love for history and understanding the importance of why people do what they do because they believe in it is another reason I want to attend this trip. I think that the context of my last two History Day projects, on Julius Hobson Sr. and Congressman John Lewis, is even more of a reason I need to attend this trip. The background information I gained from both projects helped me understand the time period and the importance of why the four young men and other students like them made a statement by sitting in for what was right.”

Another student, Diani, wrote: “Those four African-American men began a movement to end segregation in a non-violent way. This is a good opportunity for people of all races to be able to listen to the stories of the victims of segregation.”

I quickly realized that many of my students didn’t know about the Greensboro sit-in. My first step was to visit the museum’s Web site and view the teacher resources. I found the background guide helpful. In our literacy class we took a period to read what the sit-ins were about. It gave the students an opportunity to understand the historical context as well as to ask questions. We had a candid discussion about where Greensboro is, why the sit-in was significant and then linked them to the D.C. scene. Many of my students have heard of Mary Church Terrell but were unaware of her important role in desegregating lunch counters and restaurants here in Washington.

While we didn’t use the video segments the museum provided in its teacher resource pack, I think it could have been helpful and may be something that I integrate as an activity for all my students later this month.

On the day of the event we left from school quickly and headed to Union Station for lunch and then to catch the subway. My students were very excited about the event. We rushed in, with just a few minutes to spare. While they were some of the youngest participants there, they were incredibly attentive and respectful.

Jocelyn came prepared with written questions. When it was time to take questions from the audience she was quick to share. When the microphones were set up in the aisle Cyvon, Norman, and Charles joined her. I was astonished and proud. As a teacher it’s always exciting to see your students participate and be engaged in the material—and to feel comfortable enough to want to ask a question in front of their peers! 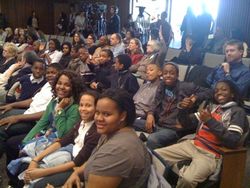 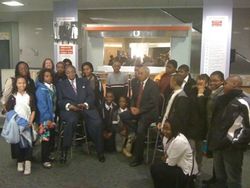 Amy Trenkle's middle-school class shared these two photos of their trip to the museum. Left: Students at the Youth Town Hall. Right: Students, Franklin McCain (left), and Joseph McNeil (right) pose in front of the lunch counter on display in the museum.

The highlight for my students came at the end of the town hall session when we were escorted upstairs and allowed to take a picture at the Woolworth lunch counter with two members of the Greensboro Four. Jocelyn was so excited and proud to get their signatures on her typed list of questions.

Discussion after the event

The ride home was full of chatter about the event. My students were excited to meet living history! They really were interested in what they had witnessed. As a follow up I encouraged my students to blog about their experience. Below are some of the reactions from the students:

Cyvon wrote, “From this experience I learned to work hard, get an education, and stay focused. I think students of today can learn from students in the civil rights movement about courage. This was the best opportunity in my life.”

Rachel summarized our event by writing, “I had a great time listening to the three men talk about what they where thinking when they planned to do the sit-in. Also they told us how an old lady had come up to them, put her hand on one of the guy’s shoulders then said what took you so long to stand up for your rights in this place then she had walked away and left the store. The guys taught me a lot such as when the security did not know what to do when he saw them sitting because he couldn’t do anything because they were not bothering anyone. Also I learned that they closed the store early because of them, and lastly I learned that they did the sit-in more than one time until others started to join in. My opinion of the story is that they went through a non-violent protest and no one could do any thing about it so I think that the men were very brave and they had never backed down not even once.” 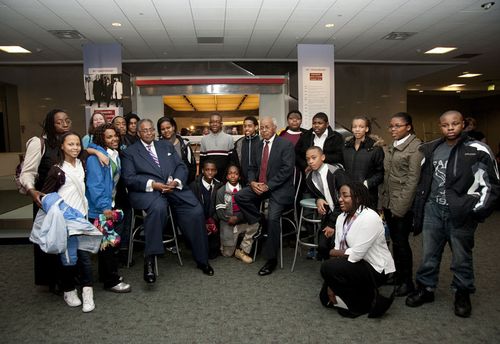 As a teacher, I think whenever students have a chance to interact with the pages of history, a new pathway is forged. These type of experiences open gateways for students and encourage them not to be passive readers of history but to be engaged in the world around them. It also encourages them to think about the impact that not only one person can make, but what a difference they can make in their own community and for larger movements.

Amy Trenkle is a social studies teacher in DC Public Schools and an adjunct professor at American University.