Designing the American Dream with Mrs. Obama in mind

27-year-old Jason Wu is the creative mind behind Michelle Obama’s gown, donated to the museum in a ceremony yesterday. (I was lucky enough to be in the audience for the special event.)  Born in Taiwan, Wu was nine when his family moved to Vancouver; he later studied in Tokyo and Paris, before enrolling in the Parsons School of Design. He debuted his collection in 2006.

And in 2009? Along with the rest of the world, Wu saw First Lady Michelle Obama step out on television wearing his gown (he had no idea it was being seriously considered until that moment). “To say that she has changed my life is truly an understatement.” 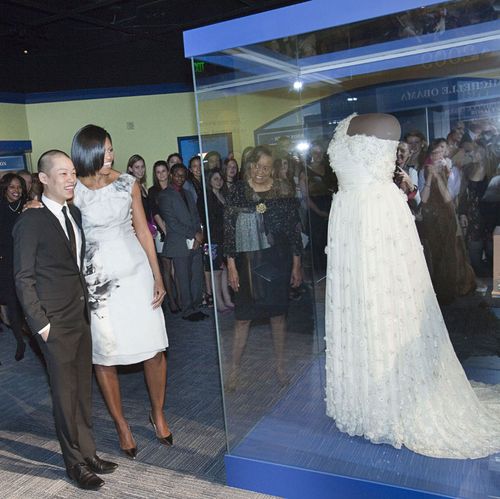 As Director Brent D. Glass has expressed in previous blog posts, the museum is committed to telling the story of what it means to be an American, a story that includes overcoming barriers to achieve the American Dream of freedom and opportunity. Jason Wu’s achievements are an example of such a story. “I could never have imagined that, as a 26 year old Taiwan-born immigrant who came to the United States with dreams of becoming a fashion designer, that I would one day be standing here,” Wu revealed. “I’ve learned first-hand that America is truly the land of opportunity.”

Concluding his remarks, Jason Wu turned to address Michelle Obama on stage, placing his hands over his heart: “Thank you for having the courage and vision to choose a gown made by a young designer who didn’t fit the traditional mold. Thank you for reminding us all that in this country nothing is impossible. Most of all, thank you for allowing my story to be a small part of this incredible moment in American history.” 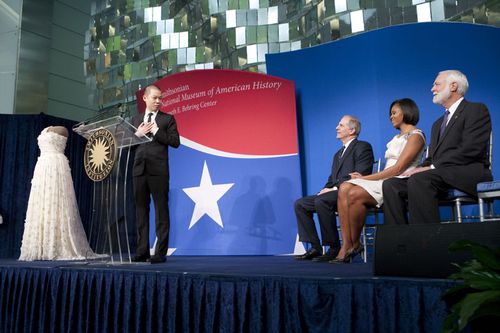 Looking at the gown beside her—which she hasn’t seen since the day she took it off—Mrs. Obama talked about the memories of inauguration day that came rushing back: the freezing cold weather; the hundreds of thousands of people flooding the National Mall; letters from octogenarians who said they never thought they’d live to see the day. “This gown is a masterpiece,” she gushed. “It is simple, it’s elegant, and it comes from this brilliant young mind, someone who is living the American Dream.” 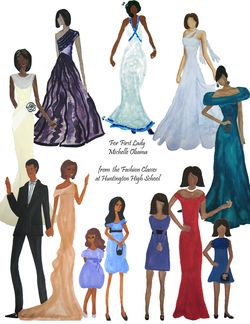 Students from the Fashion Design and Illustration classes at Huntington High School in New York listened intently as the First Lady spoke. In 2009, the school sent Mrs. Obama a book of inaugural gown designs created by students. During the ceremony, she acknowledged the young designers, reflecting on how much fun it was to look through their creations. “You make us proud,” she praised and noted that Jason Wu is a young man who, not so long ago, was “just an aspiring designer like many of you students here.”

The donation ceremony, for Mrs. Obama, was “about much more than this gown. It’s also about how, with enough focus and with enough determination, someone in this room could be the next Jason Wu. Someone in this room could be the next Barack Obama. It’s about how the American story is written by real people—not just names on a page. And it’s about how something you create today—whether it’s a dress, or a painting, or a story or a song–-can help teach the next generation in a way that nothing else can.” 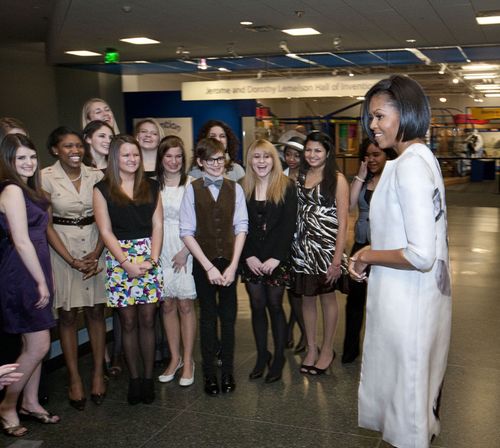 You can read Mrs. Obama’s remarks in full on the White House Web site. Her gown is now on display in the new “A First Lady’s Debut” gallery, part of the First Ladies at the Smithsonian exhibition. Visit the online exhibition for access to the artifacts and photographs on view, including 24 dresses and more than 100 other objects. Step behind-the-scenes with a curator and a conservator preparing the new "A First Lady's Debut" gallery in this video.

Posted in From the Collections, First Ladies