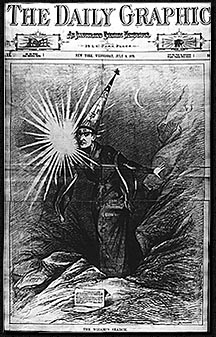 New Jersey, or at least that part of it nearest New York City, has a long history as a technological region, born out of Thomas Edison’s laboratories, the prototypes of all industrial research labs. They thrived with Edison at the helm for almost fifty years. When we think of the “Wizard of Menlo Park,” we think of electric lighting, the phonograph, the stock ticker, and other groundbreaking inventions that resulted from what were arguably Edison’s most fertile years. We seldom realize that his first and most famous “invention factory” in Menlo Park (now part of Edison Township), which opened in 1876, existed for a relatively short time.

Quickly outgrowing this first lab, Edison moved to New York City in 1881 and stopped working at Menlo Park late in 1882 (and even though he and his wife Mary continued to use their Menlo Park home during the summer, he turned his back on Menlo Park completely in 1884, distraught over Mary’s premature death at the age of twenty-nine). Fortunately, Edison had the resources to overcome psychological, financial, and other obstacles, and the Edison laboratories grew to even grander proportions in West Orange, New Jersey.

After Edison abandoned Menlo Park, the complex deteriorated rapidly. When in the 1920s Henry Ford wanted to honor his good friend Thomas Edison by moving the Menlo Park complex lock, stock, and barrel to Dearborn, Michigan, and the new Henry Ford Museum and Greenfield Village, he found almost nothing to preserve and ended up re-creating some of the original buildings. Today, a tower topped with a giant lightbulb stands on the Menlo Park site and Edison’s West Orange lab is preserved as a historic site. But Edison’s labs left a rich legacy, not only for New Jersey but for the world. 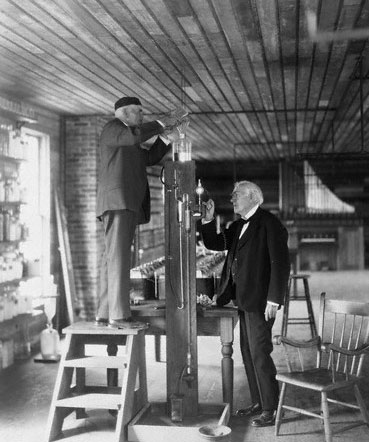 Edison and Francis Jehl reenacted the evacuation of an experimental lightbulb during the dedication ceremonies of the re-created Menlo Park lab at the Henry Ford Museum and Greenfield Village in Dearborn, Michigan, in 1929. SI negative #87-1732.

Like inventors themselves, research laboratories seem to have a finite life span, at least in terms of their periods of peak productivity. When we polled a group of historians and other experts on this as part of the Lemelson Center’s “Places of Invention” project, the consensus was a maximum period of about 20 years, a phenomenon repeated in New Jersey (and elsewhere) at places including Bell Labs and RCA. Accounting for this longevity, or lack thereof, is no simple task, but it has something to do with the complex chemistry between people and place. Questioning what resources exist, how long they last, what the competition for them is, and given those factors, how long the institution’s way of operating can be maintained, can shed light on the underlying causes of this pattern.