Who among us hasn’t had to memorize or study Abraham Lincoln’s famous Gettysburg Address? To this day, it is Lincoln’s words that live on, and their longevity only seems appropriate as memento of a man who knew the power of words. As the museum continues its exhibition Abraham Lincoln: An Extraordinary Life, we’ve been selecting groups of visitors to receive a special trip to the rooftop terrace of the museum and a signed copy of the exhibition book. As April marks the anniversary of Lincoln’s death, it is especially poignant to explore the live and legacy of our 16th president. 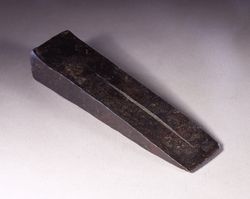 While visiting their brother, Michael, in D.C., Adra Steen and Crystal Bourgeois stopped by the museum (Saturday, April 24) with the rest of their family, Carrie and Larry. We selected the group as they were looking at the wedge Lincoln used to split rails in his youth. When informed that the wedge was kept as a token of friendship, and asked if any of them had a token of friendship as well, Adra mentioned she made a poster board puzzle with her friends in middle school, with each of them taking a piece. When we asked her if she would give up her puzzle piece to the museum if one of her friends became famous in 50 years, she laughed, and said, “If you wanted it!” 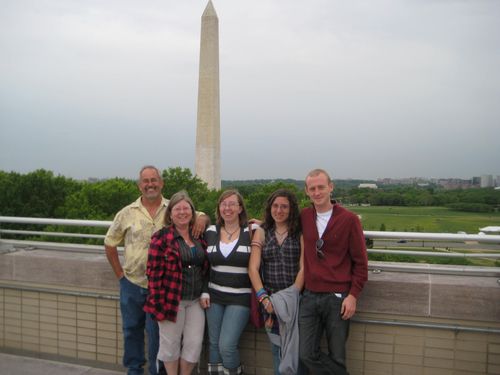 Michael speculated that the reason Lincoln was so well-liked during his presidency was because his photograph was so widely available, and helped people really feel like they knew him. He mentioned that when Lincoln died, the funeral train traveled to many states, which allowed people to experience, and mourn, his death personally. 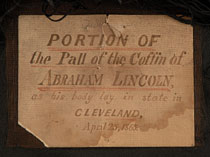 Elli Atchison and Margaret Valley, on a mother-daughter trip from Florida, were found examining an artifact from Lincon’s death, a funeral pall, when we invited them to share their thoughts about Lincoln (Sunday, April 25). Elli thought the pall was put on display because it helps express the mourning of the country at his loss. She spoke of the tragedy of his coming to office, seeing the Civil War come to an end, and then not getting a chance to enjoy the reunited country he fought to save. Margaret appreciated finally seeing objects directly related to the man she heard so much about throughout her lifetime. 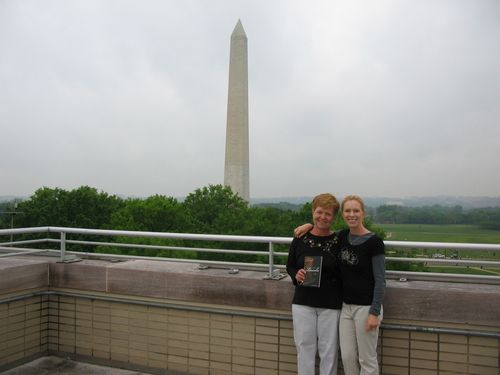 Both groups ended their visits by talking about the power of Lincoln’s words. Elli and Margaret went to the Jefferson Memorial and both of them found his words to be somewhat inaccessible, whereas they felt Lincoln’s words had great meaning in understandable simplicity. Michael agreed, marveling at what a wordsmith Lincoln was. Through his youth to his death, Lincoln’s words live on.

Anna Doorenbos is a facilitator at the National Museum of American History.