What do you think of when you see the name “Abraham Lincoln”? Do you think of the Gettysburg Address? How about the Civil War? Do you get a mental image of him?

The museum continues its commemoration (April 14-26) of the extraordinary life of Abraham Lincoln on the anniversary of his assassination with special activities across the Web and around D.C. Each day, a group of visitors is selected to receive a special trip to the rooftop terrace of the museum and a signed copy of the exhibition book, Abraham Lincoln: An Extraordinary Life.

As actress Laura Keene cradled the president’s head, drops of his blood stained her cuff. She gave the cuff to her niece who preserved it throughout her life.

On Thursday (April 22), Howard and Kathie Chapman from Long Beach, California, were viewing the cuff worn by Our American Cousin leading actress Laura Keene when Lincoln was assassinated. Keene rushed to the president’s box with water. As she held his head, drops of blood stained her cuff.

“Well, at first we thought the cuff belonged to the doctor,” remarked Howard. “But then we read a little further and were surprised to find it was actually worn by the actress.” 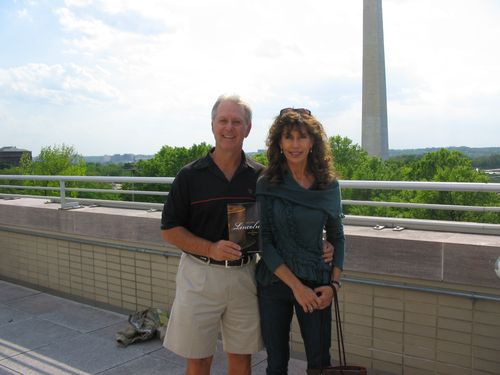 The Chapmans were visiting the Smithsonian Castle when they saw a picture of Lincoln’s hat and trekked across the National Mall to see the real thing.

“As a little kid I would spend a lot of time with the older generation,” said Howard. “I have a lot of relatives from Tennessee, and they would take me to Civil War sites. That really got me interested in history. To have a battle and lose 50,000 men is unreal—we lost that number in Vietnam. The casualties of the Civil War were just astounding.” 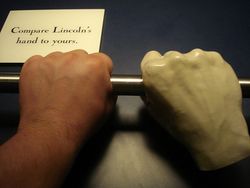 On Friday (April 23), Jordan Walker, Mary Pat Ryan, and Carol Mingea were on an 8th grade field trip from Colonial Heights, Virginia, when they were selected. The three were comparing the size of their hand with that of a true-to-size model of Lincoln’s hand.

“How often would you be able to put your hand by a president’s hand asked Mary Pat. “That was a really neat thing to be able to do.”

“I think people like to compare themselves to Lincoln—and not just their hand with a model of his, but their character—because of the principles he held,” said Carol. “In many ways he was a man before his time. He freed the slaves and made the nation better when the nation was growing and changing.” 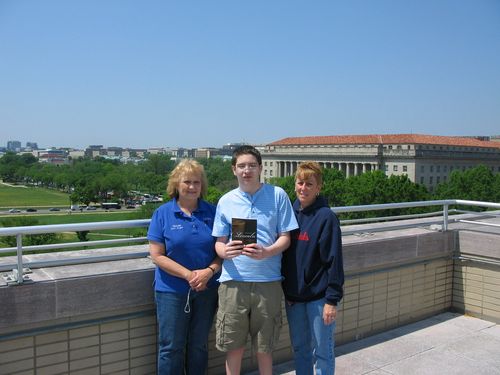 Who will we pick next for a special trip to the rooftop? It could be you if we spot you in our exhibition, Abraham Lincoln: An Extraordinary Life!

Erin Nielsen is a floor manager with the Department of Public Programs at the National Museum of American History. She likes seeing how people react when they find out they’re the lucky visitors of the day.