Throughout the spring, the blog has offered up a variety of topics related to freedom. We often use the term to indicate political freedom, but when I came across this photograph, Frida with Magenta Rebozo by Nickolas Muray made in his New York City studio in 1939, it raised some questions for me about personal freedoms. As a Mexican woman she wrestled with cultural and social constructions, but as an artist, the canvas gave her great freedom to express and explore her physical, emotional and psychological pain. She wrestled with her freedom of choice when it came to men. Solomon Grimberg explores some of these questions in his book I Will Never Forget You which draws on letters from the Muray archive at the Archives of Amerian Art. 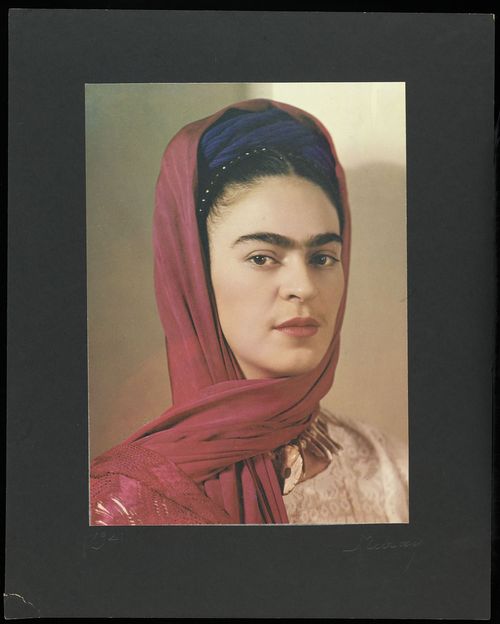 What strikes me about the photograph is how “real” she looks. Which might be a funny thing to say, but when we visually know someone through black and white photography, it is jarring to see them so much more life-like. We know our world to be in color so viewing a monochromatic photograph often has the effect of creating historical distance and refocuses the viewer on elements such as shape, form, and meaning.

Muray was a master at the three color-carbro process in which multiple layers of pigment are built up though a series of tissues laid in registration. It creates a vibrant photograph. In 1939, when this photograph was made, color photography was not widely available to the amateur market, but advertisers and magazine publishers were aiming to use it to their advantage. Because this particular process is built in layers, microscopic as they maybe, light still bounces around in a way that is different than in other processes resulting in luminescent skin.

Though Kahlo died in 1954, the intensity of her gaze in this nearly life-sized color photograph makes her seem very present. I see her offering a cautionary warning to be mindful that the people we study in history are real humans with greatness and flaws. And the flipside of that is that, we, as regular humans can also be heroic and make history when we step up to exercise our freedoms like sitting at a lunch counter to stand up for what is just.

Posted in From the Collections, Stories of Freedom & Justice, Women's History