One of the fun parts of being a curator is deciding exactly what to collect. Sometimes it’s easy—the original helium-neon laser that was offered by inventor Ali Javan—yes,I think we can find room for that. Sometimes it’s more difficult—you have how many radio tubes you’d like to donate? 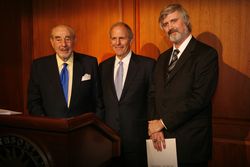 Usually the decision, as with this Lutron donation, is somewhere in between. When Joel Spira, founder of Lutron Electronics offered to donate Lutron objects my first thought was, great! Dimmers are an important part of lighting technology, and we really don’t have that much from the mid to late 20th century in the collection. Most of our existing holdings are from the late 19th and early 20th centuries-as with some of the pieces you see here.

Then I received the list of materials available for donation and had to make some hard decisions. Of the many items offered, what few should we collect? After all-one of the first rules for any museum is, you can’t collect it all.

So what to choose? The items I selected represent nearly 50 years of lighting control technology-from the solid state rotary dimmer of the early 1960s to more recent programmable devices. And this convergence of technologies—lighting controls and integrated circuits—are allowing people to have more control over their personal environments. 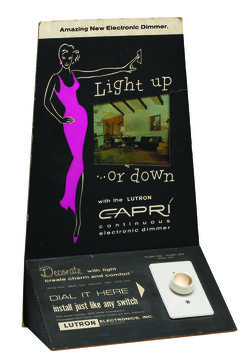 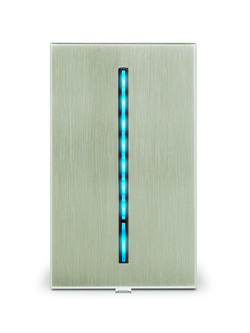 Among the objects collected by the museum are a display featuring the solid-state electronic dimming device, "Capri," from the early 60s (left) and the "Vierti" single-touch dimmer from 2007 (right).

And that’s what this is all about–stories about people and their everyday lives. When I read accounts of most folks’ first encounter with electric lighting over 100 years ago, I’m always struck by the sense of awe and wonder they felt. People stood and just gazed at the glowing 16 candlepower incandescent bulbs–entranced by a light source without open flames, or foul odors, or consumption of oxygen. It seemed a miracle-a miracle controlled by a simple little keyed switch.

American homes changed significantly during the 20th century as people adopted electricity for any number of tasks, especially illumination. Lighting became the application that convinced most people to electrify their environments. And it has become such a part of our daily lives that we now only think of lighting when we hit the switch and nothing lights up.

So what can we say about lighting today? Energy efficiency issues are important as we consider replacing incandescent lamps with compact fluorescents or LEDs. But the issue of personal control of our environments is also important. As are the expectations we have about the extent of control we should have.

Joel Spira’s original inventor’s notebook, famously known as "Notebook A" with more than 100 pages of handwritten documentation and historic photographs.

We at the National Museum of American History, are constantly faced with a question. What of today should we preserve so that future generations will have the raw material of history to study when they are looking back and trying to understand us? Objects such as those donated by Lutron are part of the answer to that question. The tools of everyday life, like light switches, help us to understand an ever-changing, technological society.

Harold D. Wallace Jr. is Associate Curator in the Division of Work and Industry at the National Museum of American History.