You may know that the museum has around 3 million objects in its collections. You may have guessed—especially if you’ve been here on a busy summer day—that we get almost 4.5 million visitors a year. You can probably imagine that it takes a dedicated staff of more than 250 people to collect, preserve, and share the stories of our nation. But did you have any idea that almost 200 people volunteer their free time as docents?

Docents support the museum’s collections, research, and exhibitions by staffing interactive carts, assisting visitors in selected exhibitions, giving Highlights Tours, and facilitating hands-on activities. They interact with thousands of visitors—one may have made your visit especially memorable.

Two of these special, indispensable people are Jane Dunphy and and Barbara Lowis Lehmann, who were recently honored for having devoted forty years of service to the museum. 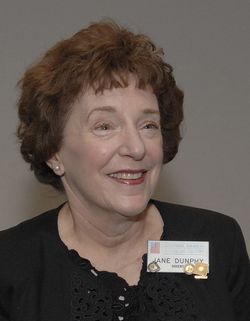 In search of work that combined her love of children with her love of history, Jane responded to a newspaper ad calling for Smithsonian volunteers. “When I stopped working at the Department of Commerce, I thought that maybe I should have been a teacher,” she said. “But I’ve gotten to do exactly what I wanted to do.”

She began her docent career conducting school tours through the Road Vehicles Hall, a precursor to what is now the museum’s transportation exhibit America on the Move. Her favorite school tours consisted of young children, who she found were very interested in vehicles such as carriages, automobiles and locomotives when prompted by the right questions.

Jane continued to lead school groups through the museum while combining her interest in 18th-century American life in the two former exhibits After the Revolution: Everyday Life in America, 1780-1800 and1776. While the museum was closed for renovations from 2006 to 2008, she joined fellow museum docents at the Smithsonian’s National Air and Space Museum serving visitors at the Treasures of American History exhibition.

Currently conducting Highlight tours of the museum, Jane continues to learn while encouraging visitors to become enthusiastic about history. A Washington-area native, she volunteers Thursday mornings at the museum.

“When my youngest child went to school, I needed something to do,” said Barbara of her beginnings at the museum. Now in her 40th year as a docent, she remains committed to detail and serving the public. 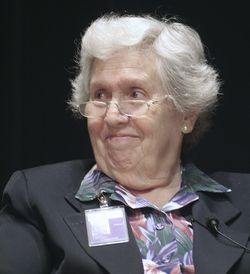 At a young age Barbara realized that she had more fun in the shop with her father than in the kitchen with her mother. Her early experience with machines and tools transcended through the years, helping her find her niche at the museum. She served as the docent in the museum’s Engines of Change: The American Industrial Revolution, 1790-1860 exhibition where she was able to engage with visitors and give details about the machines she knew so well.

“I’m here to serve the public and kids,” she said. “I like to go into detail instead of making things seem artificial.”

With Engines of Change now closed, Barbara currently works in America on the Move. She also worked in the former Hall of Agriculture and with the Math and Measurement exhibit. She also spent many years conducting school tours focused on the Industrial Revolution.

Originally from central Illinois, Barbara attended the University of Illinois where she obtained two degrees in education and business education. In 1963, she and her family moved to the Washington, D.C. area.

You can come and meet some of our docents as they give tours each day. Or you can become one yourself! Find out more about volunteering on our Web site.

Kate Wiley is a communications assistant at the National Museum of American History.