Why is this homely little brown box, with its sign that identifies it as the "World's First Margarita Machine," living at the Smithsonian? And why are we writing about that margarita machine on May 5, Cinco de Mayo? Here's a story about how some things come to the Smithsonian; moreover, how this particular thing is connected, well, to blenders and battles, entrepreneurs and enchiladas, and to impresarios and good old American ingenuity. 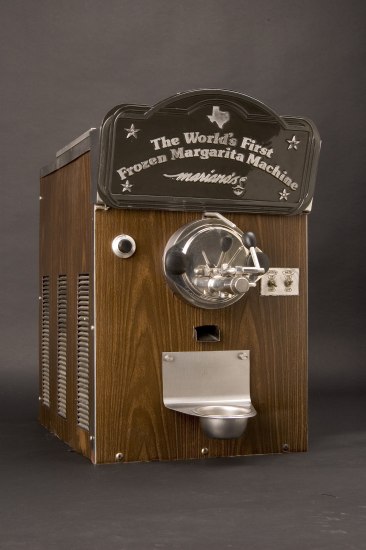 I am a curator who specializes in American foodways (among other things), and a member of the team that brought Julia Child's kitchen to the National Museum of American History. In the summer of 2003, in the course of developing a public program on Tex-Mex food, I got to know a Houston food writer named Robb Walsh. Robb had just written a wonderful book, The Tex-Mex Cookbook, a history of the phenomenon he calls an American regional cuisine. In that book, he told the story of a Dallas restauranteur who invented the frozen margarita machine. Robb told me that I had to go and get that machine for the museum. Intrigued, I embarked on the usual investigative process we go through when we are considering a new acquisition.

First and foremost, I had to determine whether, indeed, this was the "world's first margarita machine." I had to look at a trail of references to the history of margaritas, which, by the way, has as many claimants to their invention as there are to hamburgers. I looked at the patent history for frozen drink makers, checked in on the repeal of Texas liquor laws for the sale of "hard" liquor, and ran down press mentions of this new drink. Then I contacted the "world's first" developer and took down his story. I made sure that he would really give us the machine that built his restaurant empire. I decided to go for it and made my proposal to the collections committee stating why it should come here. The short version is: The committee approved it, and a press release announcing it brought a wave of attention to this homely little brown box and its new home at the Smithsonian.

Now, here's the long version: the story of brown boxes, frozen margaritas, Mexican food in America, one man's entrepreneurial coup, and why Americans are so attached to everything represented by the machine. Mariano Martinez, a young Texas restauranteur, and his frozen margarita machine were at the crossroads of a revolution that took well over a hundred years to unfold. It was the revolution that caused Americans to adopt several regional versions of Mexican food (and Chinese and Italian food) as a major culinary underpinning of American food. Today, Mexican cuisine, in all its modified, regionalized (Cal-Mex, Numex-Mex, Sonoran Mex), commercialized, and even highly processed varieties, is as American as, well, as apple pie. In the 1970s, the margarita surpassed the martini as the most popular American cocktail and, in the 1980s, salsa surpassed ketchup as the most-used American condiment. First made on the California-Mexican border, the margarita became associated with the service of Mexican food in the United States, though it eventually spread to Mexico and over the world. Frozen margaritas, made with the help of blenders, became popular in the 1950s. 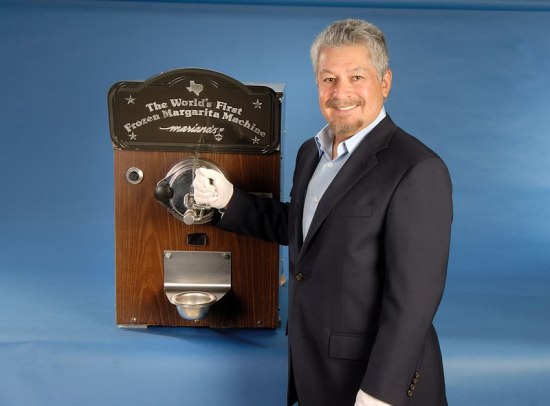 In 1971, young Mariano Martinez started serving margaritas in his new restaurant, Mariano's Mexican Cuisine. His customers created a high demand for the newly popular frozen drink. With their blenders hard-pressed to produce a consistent mix for the drink they made from Mariano's father's recipe, his bartenders were in rebellion. Ordinary blenders just did not deliver a consistent mix for frozen margaritas. Inspired by the 7-Eleven Slurpee machine, used since 1965 to make semi-frozen beverages, Martinez and a friend, Frank Adams, tinkered with Martinez's dad's recipe and adapted a soft-serve ice-cream machine to make margarita "slush."

The machine was such a success that, according to Martinez, "it brought bars in Tex-Mex restaurants front and center. People came to Mariano's for that frozen margarita out of the machine." Mariano couldn't patent something already patented, so many versions of the frozen margarita machine subsequently came into the market. His machine, however, made Mariano's restaurant a success, leading to other restaurants (with their own commercial machines pouring out the margaritas). When Mariano decided to close the old restaurant and move it to a new location, he decided to retire the machine. We asked for it. So, after 34 years of blending lime juice, tequila, ice, and sugar for enthusiastic customers, the world's first frozen margarita machine was retired to the Smithsonian.

Today, on May the fifth, revelers all over the United States will drink gallons of margaritas and Mexican beers. They will listen to mariachi music, and consume tons of their favorite Mexican American fusion food, Tex-Mex, Cal-Mex or just "Mexican." They will do all these things because, in 1862, people in California and citizens of the state of Puebla in Mexico began celebrating the unlikely victory of Mexican troops over the invaders from France. Mexican Americans, in fact, everybody else in the country, have enjoyed this celebration ever since.

How this victory, not much noticed in Mexico at all, became a vehicle for margarita, beer, and Mexican American food ingestion, a source of income for American restaurants and bars, and a bonanza for Mexican tequila and beer makers, is a long story. That story is, in some ways, much like the story of how and why millions of non-Catholics drink a lot of green beer on an Irish Catholic saint's name day. It is, in almost every way, a story about the complex ingredients in American identity and the odd and wonderful attachments Americans can have to things like "The World's First Frozen Margarita Machine." Do think of this little brown box when next you enjoy one, with your nachos, tacos, and salsa.

Rayna Green is a curator in the Division of Home and Community Life and Director of the American Indian Program at the National Museum of American History. 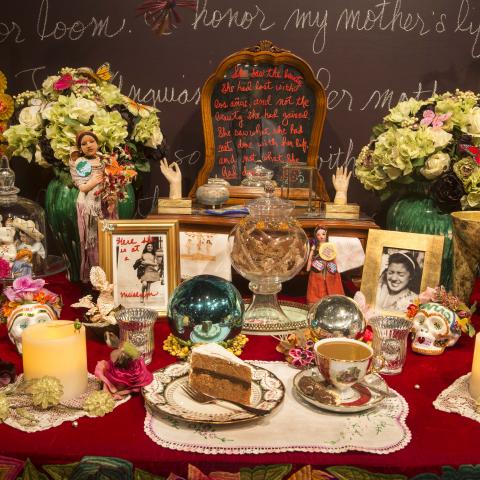