How do you exhibit commitment?

In February of this year, we commemorated the 50th anniversary of the sit-in at the F. W. Woolworth lunchcounter in Greensboro, NC. In 1960, four African American freshman college students at North Carolina A&T University became actors in both American history and the nation’s long struggle between its founding ideals of equality and liberty and its equally deep-rooted legacies of exploitation and injustice. I agree with historian Clay Carson’s assertion that theirs was a bold strike against a system that had worked to keep most of the inhabitants of the wealthiest nation on the planet in a veritable peasant class for generations. Franklin McCain, Joseph McNeil, Ezell Blair, Jr., and David Richmond are not widely hailed as the American heroes they are, but we are working to correct that by telling their story every day at the museum.

As amazing as the sit-in in February 1960 was, however, there’s more to the story. What was even more revolutionary and powerful was what was happening at Shaw University in Raleigh, North Carolina two months after the initial sit-in at the Woolworth’s. In April, students inspired by the actions of the A&T freshmen met to organize the Student Non-Violent Coordinating Committee (SNCC), which would ultimately prove to be one of the most powerful grass-roots movements in our nation’s history. As historian Howard Zinn wrote of SNCC in 1964, “while they have no famous leaders, very little money, no inner access to the seats of national authority, they are clearly the front line on the Negro assault on the moral comfort of white America.”

I spent five days at Shaw last month with veterans of SNCC—pronounced “snick”—at their 50th anniversary conference. After meeting its organizers, singing its songs, and feeling its camaraderie and conflict, nostalgic pride and melancholy disappointment, I better understood the civil rights movement and what it took to create such revolutionary change in the nation. At the same time, however, I was perplexed about how to accurately share this story with the public at a museum where we preserve, examine, and tell stories with objects and documents. The Greensboro lunch counter is an inspiring physical symbol that helps people to understand the story of the sit in that began there. But the story of the sit-ins is also the story of the beginning of SNCC; that story is much harder to comprehend and particularly difficult to do so through its three-dimensional artifacts. SNCC was hundreds of people of diverse backgrounds who decided that political and civic activism did not arise from a politics of consumerism. Rather than acting as dissatisfied shoppers and asking store management to change a policy or product, SNCC students took action. Students from all over the nation left school and worked day after day, under the threat of violence and death, for ten dollars a week ($9.64 after deductions). 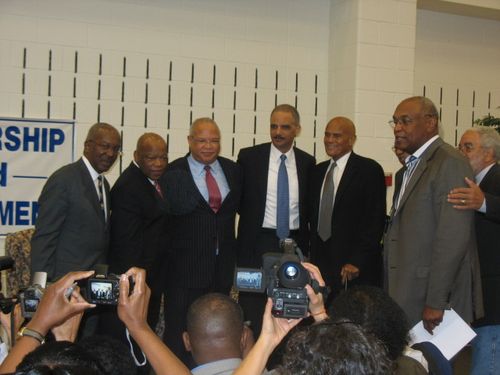 More than any single march, sit-in, protest, or campaign, their dogged commitment to forcing the great promise and progressiveness in the founding of the nation to overcome the great evil that was equally fundamental to its history was the force behind many of the accomplishments of the Civil Rights Movement. The long and dedicated work of a multitude of people whose stories are less well known than that of the Greensboro Four, and far less than Rosa Parks or Martin Luther King, Jr., began a democratization of America that allowed my daughter not only to eat at a restaurant anywhere in the nation, but also to attend West Point, teach at Stanford, or sit in the Oval Office. Like democracy itself, this story is about countless people taking their citizenship to heart. I left Raleigh inspired, as we come up on more anniversaries of the civil rights movement, to help understand and discuss this movement and its legacy–a legacy that tells us, as scholar and movement activist Bernice Johnson Reagon suggested on the last day of the anniversary, we all have the power to conceive a way out a seemingly insurmountable situation. Or as one of the movement’s freedom songs stated: “Keep your eyes on the prize, Hold on.”

Christopher Wilson is Director of the Program in African American Culture at the National Museum of American History.