Lena Horne was an American treasure, a cultural icon whose career achievements and social legacy challenged and transformed America’s notions about race and culture. A Renaissance woman, she lived and entertained during an era when women and “Negroes” were constrained by limited social roles, strict conventions, and public policies that separated genders and races.

But Ms. Horne was anything but conventional. She paid dearly for her originality. 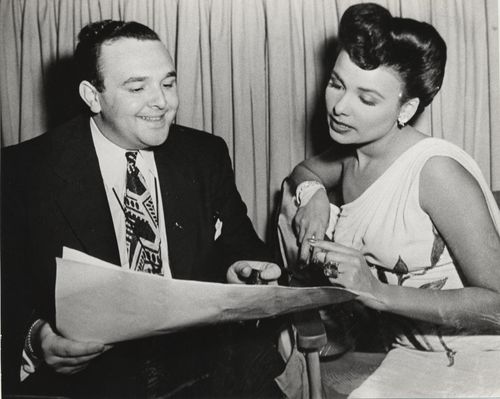 Born in Brooklyn, New York, June 30, 1917, she was reared in a socially conscious family by a fiercely independent grandmother who made her granddaughter a lifetime member of the National Association for the Advancement of Colored People (NAACP) at age two. A friendship with Paul Robeson added to her social development.

“Paul taught me about being proud because I was Negro,” she said in a 1966 Pacifica Radio interview. “They didn’t teach it in history books. He talked to me about my heritage and that’s why I always loved him.”

Outspoken about racism, her dignity and commitment to an inclusive and just American society moved her to action and gave her an authentic voice and identity. On tour for the USO she was outraged to find white, German POWs sitting in the front at her performance while black U.S. soldiers were confined to the back. She protested and was disinvited from tours. Horne used her own funds to finance performances for black troops.

In 1963, she attended a civil rights rally in Jackson, Mississippi, organized by NAACP field secretary Medgar Evers. Though terrified by the violence that plagued the movement, she spoke at the rally, performed at a church with Billy Strayhorn, and attended a session teaching young protestors how to resist violence. Back home in New York City, moments before being interviewed on the Today Show, she learned that Medgar Evers had been killed. Her resolve to continue fighting for social justice deepened.

In this Smithsonian Jazz tribute post to Lena Horne we present materials from our archives and excerpts of her distinctive voice from a Smithsonian Jazz radio series she hosted in the late 1990s, featuring performances by the Smithsonian Jazz Masterworks Orchestra and interviews.

Smithsonian Jazz is committed to doing its part to preserve this cultural heritage so that her voice continues to be heard and her legacy is appreciated by current and future generations.

The Award winning Smithsonian Jazz series began in 1994 featuring David Baker, the Smithsonian Jazz Masterworks Orchestra, and hosted by Lena Horne. Enjoy these audio clips from the 1990s.  Note: There may be silence for a few seconds as the audio loads.

The George Sidney Collection in the National Museum of American History’s Archives Center preserves MGM photos, personal notes, and other original source materials from the Hollywood director for public research. In the 1940s, Lena Horne earned $1,000 a week from MGM and was the first black performer to sign a long-term contract with a major Hollywood studio. By 1945, an article in a major magazine described her as “the nation’s top Negro entertainer.” 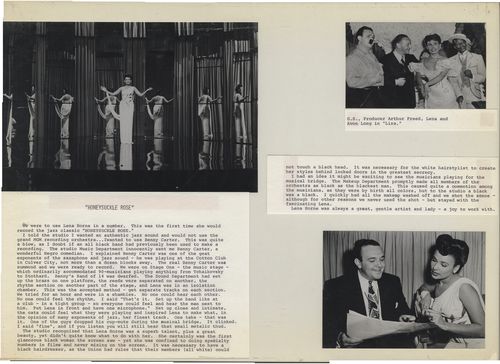 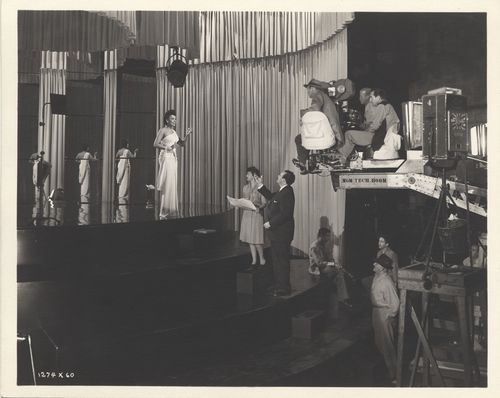 In the mirror photo a regal Horne stands before a backdrop of full length mirrors, elegantly draped in a Grecian inspired gown. Her image is multiplied by mirrors that show her from many views. Absent from the beautiful portrait is any sign of the indignities that she and other black cast members encountered daily. But Sidney’s notes tell the story and pay tribute to Ms. Horne’s grace.

Joann Stevens is the program director for Jazz Appreciation Month and Dwight Blocker Bowers is curator of Culture and the Arts at the National Museum of American History. 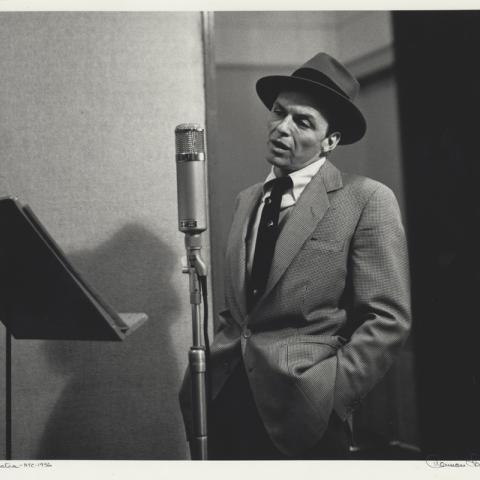