Singing for freedom at the White House

"I just got a call from the White House and they want us to perform Sing for Freedom for their visitors one day during Black History Month. What do you think?" This is the question that my boss asked me as we were heading into the busiest Black History Month that the museum had ever planned. We were starting the month with programs to honor the 50th Anniversary of the Greensboro Sit-In, then hosting the Smithsonian’s Black History Month Festival, followed up with two programs looking at President Lincoln’s relationship with African-Americans, and finishing the month with a program celebrating Gerswhins’ Porgy and Bess and on top of all this we were still running our daily theatre programs, Join the Student Sit-Ins and Sing for Freedom. Even with all this going on, of course I said yes. Someone at the White House had seen our show and wanted us to bring it to the White House, what an honor! 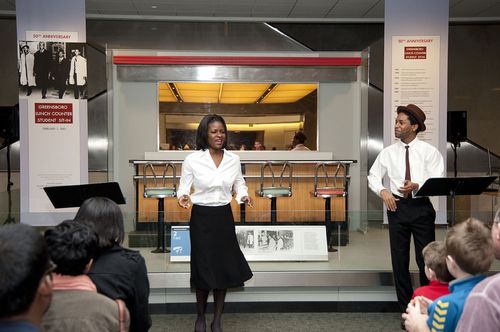 Lulu Fall and Xavier Carnegie perform "Sing for Freedom" in front of the Greensboro Lunch Counter.

The next step was to ask the Sing for Freedom performers, Xavier Carnegie, Azania Dungee, Lulu Fall and Aaron Reeder, if they were available to and interested in performing at the White House. Not surprisingly, all of them said yes. So, on a windy Friday in February, eight of us walked from the museum to the White House (Just a few blocks away), the four singers ready to perform and the four staff members who had created on the program, all very excited to see how the White House visitors would receive our show about the songs of the Civil Rights Movement.

After stopping in the green room to warm up, we were led up to a room where the singers would be performing. We were just inside the front door of the White House, where the visitors exit as they finish their tour and, once Sing for Freedom started, the room filled with visitors. They sang, "We Shall Not be Moved," "This Little Light of Mine," "Fighting for My Rights," "Woke Up This Morning with my Mind on Freedom" and the anthem of the Civil Rights Movement, "We Shall Overcome." As visitors joined in singing, one woman reached over the rope we were standing behind to hug me and tell me how much it meant to her to hear these songs sung in the White House and I saw another couple standing together, swaying and crying as they sang along with "We Shall Overcome." 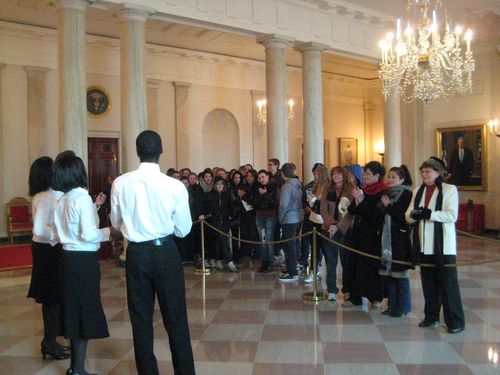 Singers perform at the White House.

As I watched the performance, I was once again struck by how singing brings people together and can give them the strength to face unimaginable challenges. It truly was an honor to see a show we worked so hard on performed at the White House, but it is even more rewarding to see visitors experience the power of song.

You can experience Sing for Freedom at the museum on Tuesdays, Wednesdays, and Thursdays in May.

Elisabeth Kilday is the Daily Programs Coordinator at the National Museum of American History.