An unheralded battle in the war against segregation

Recently at the museum we were privileged to hear from one of this country’s eminent historians, David Hackett Fischer. As he described his approach toward history and historical writing, I was intrigued by a notion he called “contingency.” There is a tension in historical theory between the idea that history turns on the self-willed actions of extraordinary individuals—a view that once dominated but now is sometimes disparagingly referred to as the “dead white men” approach—and the opposing view that it is more important (and more inclusive) to identify the social, cultural, geographical, and other factors that inexorably shape and influence both individual behavior and the broader course of human events. Fischer seemed to be seeking a middle ground, believing that the actions of individuals do have historical consequences, while at the same time it is possible to pull back and see how the collective “web of choices” can form broader trends.

This interplay of individual agency with social context described by Fischer immediately brought to mind one of my own historical heroes—my maternal grandmother. To me, she represents all those who quietly make a difference, but never make it into the history books. 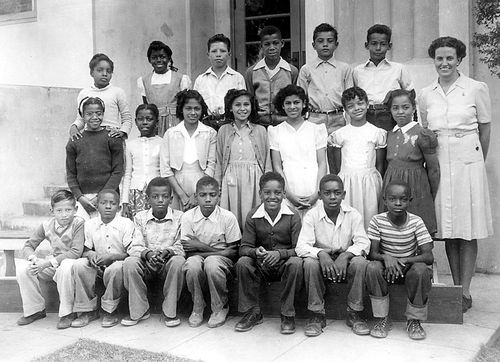 My grandmother, Almera Anderson Romney, worked at a segregated elementary school with a predominantly African American and Hispanic student population from 1946 to 1963, first as a teacher and then as principal. A few things make this fact more remarkable than it sounds. For one thing, the school was in Southern California, a place not associated with segregation in most peoples’ minds (including mine, until I learned of its history). The type of segregation practiced there was known as de facto, enforced not by law as in the South but by more subtle means such as discriminatory housing practices and school zoning. For another thing, Romney grew up in the heart of rural, Mormon Utah, the daughter of Danish immigrants, and had never even known a person of color before her tenure at the school.

Compelled to help support her struggling husband and three young children (my grandfather would pass away prematurely in 1951), Romney drew on her previous teaching experience to apply for the only job available in her local district, at an elementary school for colored children on the “wrong side of the tracks.” Almost immediately, she was incensed by the substandard condition of most aspects of the school, and began a sustained and vigorous effort to correct the inequity. Though her quest was not without its own missteps and occasional insensitivities, as teacher, and then as principal of the school for 14 years she introduced innovative educational strategies, recruited a top-notch and diverse staff, raised student performance, and built a relationship of trust and mutual admiration with the community that lasted until her death. All this was accomplished against the background of the burgeoning civil rights movement and with significant opposition from the patriarchy that governed the town and its schools. 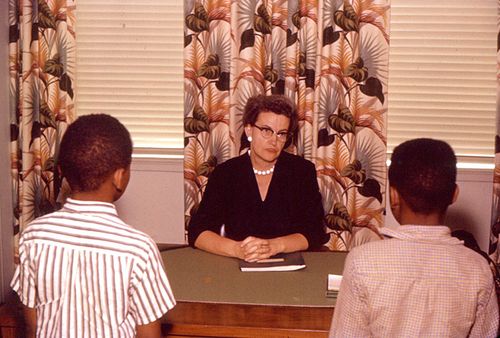 I am fascinated by the multiple layers of my grandmother’s experience—all at once a story of a mother struggling to make ends meet, a religiously-motivated person seeking to put belief into practice, a strong female executive surviving in an era of male dominance, and an unlikely but tenacious fighter of injustice. I suspect that a similarly complex array of factors informs each of our lives and the paths we choose to take; identifying these various threads and describing their interconnections is the particular challenge of a good historian.

For those wondering about the rest of the story—the ending is bittersweet. In 1970, compelled to integrate under threat of lawsuits and civil unrest, the city closed the school and redistributed students to various sites across town. While this was rightly seen as a victory against institutionalized discrimination, at the same time the surrounding community lost an important focal point of pride, common purpose, and shared experience. That same year, Romney retired after having served seven more years as principal at a different school. It is after this point that I have my fondest memories of her as an elderly, doting grandmother; only years later did I get a fuller sense of who she was, the times in which she lived, and the lives she touched.

Matthew MacArthur is Director of New Media at the National Museum of American History. He tips his hat to his own mother who not only carried on in the noble teaching tradition, but also learned enough of the historian’s trade to uncover the fascinating story behind Huntington School for her doctoral dissertation.