Becoming a U.S. citizen at the National Museum of American History

On June 12, the Colonialists met the Futurists in Flag Hall. Some 24 children from 18 countries joined family members and friends at a ceremony to pay homage to America’s past and their youthful present. 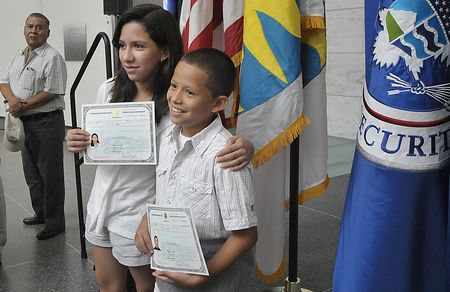 “While the Fourth of July celebrates America’s birthday, June 14th is designated as Flag Day, which marks the anniversary of the Flag Resolution of 1777 which adopted the stars and stripes design for the flag to identify the new United States,” museum director Brent Glass told the audience. President Woodrow Wilson officially proclaimed Flag Day in 1916 and in 1949 Congress designated June 14 as National Flag Day. The National Museum of American History is “a unique museum” Glass said “to explore the breadth and depth of American history and American identity.”

Some 24 boys and girls from the Fifes & Drums of Yorktown opened the ceremony, playing period music and marching in historic costume. Only a wide-eyed, 10-year old flag bearer in khakis and white shirt (a new recruit) provided a contemporary touch. 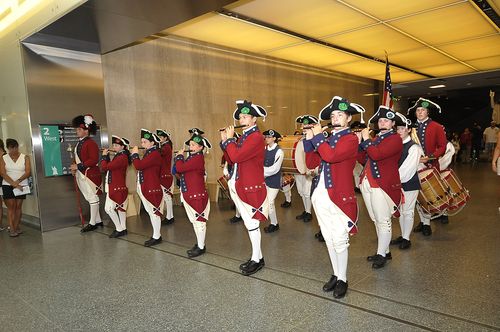 Across the hall, children as young as five and others barely in their teens sat dressed in spiffy suits and prim, colorful dresses, jeans, shorts, baseball caps, and tee shirts. A Smithsonian color guard solemnly presented the flags. A soloist sang the national anthem. Museum and immigration dignitaries said to the youth and some 300 onlookers: “your dreams can become your lives.”

Guided by immigration official Ted Kim, Field Office Director for the Washington District Office USCIS, the children stood and passionately pledged their allegiance beneath a metal abstract flag sculpture while the real Star-Spangled Banner was on exhibit nearby.

“I promise to love the United States of America. I promise to be loyal to her. I promise to defend her against her enemies. I have freely chosen to take and keep this promise, so help me God.” One by one, youngsters from Afghanistan, Bolivia, Egypt, El Salvador, Ghana, Hungary, Nepal, Sudan, and many other nations crossed the stage to receive their certificates.

The family of Julie Myrtil, 12, has lived in the U.S. nearly a decade. “To become a U.S. citizen is something great and worthwhile,” declared her father, Job Myrtil, a citizen. “It is good for the individual and the nation.” “I feel good about it,” Julie said. Her dream is to “help poor people, to find shelter and stuff like that.” 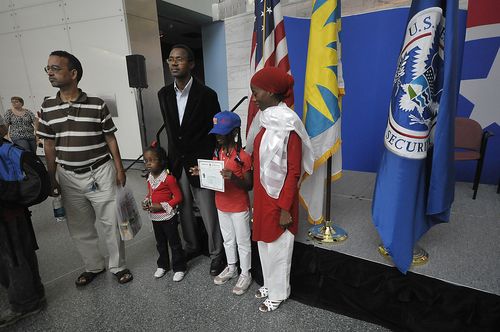 Six-year-old Linden Reeder, adopted from China in 2008, half skipped across the stage with his 18-year-old American sister, Emma, as his parents and three adopted sisters from China watched.
“This was really a surprise when immigration called,” said his mother Lisa Reeder. “We thought we would just get the (citizenship) certificate in the mail, like with the other children.” She said the American history museum is now a special place for Linden and the family. Her husband is a 25-year Navy careerist and the family has lived in many places. Emma was born in Guam, Reeder’s adopted children in China. Reflecting on the ceremony—and on parents and relatives who immigrated from Austria, Hungary, and Germany—Reeder said she now understands how they must have felt becoming citizens. “Sadly we have lost that culture of the Melting Pot” she said. This ceremony “helped recapture the past, but it is present history as well.”