What causes a hot spot of innovation like Cambridge, Massachusetts, or Silicon Valley to form? There clearly is no magic formula, though some of the key ingredients are fairly well known. Successful high-tech regions all seem to share basic advantages: an entrepreneurial culture, strong and committed leadership, a creative workforce, venture capital, governmental and political backing, and, equally important, a major research university, such as a Stanford or MIT, to serve as a core.

Birla Institute of Technology and Science logo. Courtesy of BITS-Pilani.

There are of course a host of intangible factors (such as local “cultural richness”) that go into the mix as well, making the establishment of high-tech corridors a chancy proposition at best. But, once you have found a successful model, can it be exported? Can one hot spot beget another? The answer seems to be both yes and no. There has been no end of calls for new Silicon Valleys in the United States and around the world. A few have taken hold, but in general the results have been disappointing, to say the least.

Lesser known, but more organized and arguably more successful, have been the attempts to export the winning combination of MIT and Cambridge, specifically to the developing world. Stuart W. Leslie and Robert Kargon have documented three efforts to export the model to India and Iran in the 1960s and 1970s. Emerging from World War II confident in its role as the model engineering campus, MIT embarked on a mission to launch new research-oriented technical schools in the two countries, with the expectation that they would also spur technologically driven economic development. The three schools were the Indian Institute of Technology Kanpur, the Birla Institute of Technology and Science, and, in Tehran, the Aryamehr University of Technology (renamed Sharif University of Technology in 1980).

The initiative experienced a mixed record of success. While, to be sure, MIT officials and faculty played a lead role in creating great Indian technical schools, they paid too little attention to connecting the academic experience to Indian culture and tradition. The result was that large numbers of now fairly Westernized graduates emigrated to the United States, rather than staying home to lead India’s economic and technological development. On the other hand, AMUT did much better in this regard, primarily because Iranian officials insisted on directing the benefits homeward rather than to the United States (often to the disappointment of MIT officials, who were particularly alarmed by the political implications of Iranian nuclear engineering). In any case, these instances illustrate that exporting hot spots is never a simple matter. Not only must all of the original hot spot ingredients be there, the model also needs to fit into the host culture. (In 2005, the Center hosted a conference on “Cultures of Innovation” that discussed this idea in detail. The report is available on our website.) 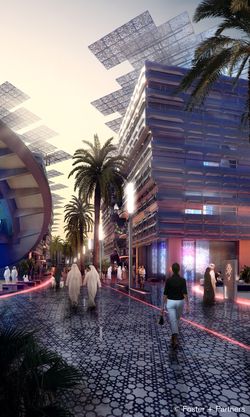 Efforts to “bottle” and export MIT continue to this day. Last fall, in partnership with MIT, the Masdar Institute of Science and Technology (MIST) opened its doors to students in the new “eco-city” of Masdar in Abu Dhabi, a subject of one of my earlier posts.

I had the pleasure of meeting MIT professor Fred Moavenzadeh, who spearheaded this joint venture in establishing the Arab world’s first research-driven, graduate-only science and technology institute. He explained that Abu Dhabi wants to shift from an oil-based economy to a knowledge-based economy focused on clean, sustainable energy. He sees MIST’s role in the region as similar to that played by MIT as the hub of the Route 128 science-technology innovation complex in Massachusetts. According to Dr. Sultan Ahmed Al Jaber, CEO of the company managing the Masdar initiative, “MIST will insure that Arab youth remain at the cutting-edge of future energy. The Institute will work to develop and promote the region’s indigenous human capital.” Apparently having learned the lessons of the past, Moavenzadeh insists that MIT will be mostly a silent partner, ensuring that MIST will be of and for the people of Abu Dhabi.