It's an odd thing to eat an omelet while holding back tears. But that's how I felt prior to the Creativity Round Table, held at Washington's Cosmos Club in late April. I wasn't sad; I was deeply inspired.

Every year, The Creativity Foundation and The Smithsonian Associates jointly select a recipient for the Benjamin Franklin Laureate Prize for Creativity. This year's Laureate ceremony at the Smithsonian's Baird Auditorium honored author and humanitarian Greg Mortenson. Richard Kurin, Smithsonian Under Secretary for History, Art, and Culture, moderated a dialogue with Mortenson intended to inspire others to see themselves as creative. 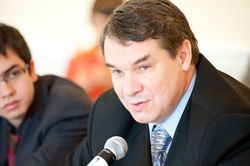 I couldn't attend the sold-out ceremony, but I was invited to represent the Smithsonian's Lemelson Center for the Study of Invention and Innovation at the more intimate Creativity Round Table, where each year's Laureate leads an informal, interactive discussion with the young Legacy Prize winners and the accomplished members of the Foundation's Junto, named in a nod to Benjamin Franklin.

The Creativity Round Table brings together multi-generational individuals who work in diverse, but frequently overlapping, disciplines, showing the many faces of innovation and creativity. In this way, the program embodies the mission of the Lemelson Center: to explore invention in history and encourage inventive creativity in young people. Invention at Play and Spark!Lab show some of the ways this exploration and encouragement happen.

At breakfast prior to the Round Table, I sat with Greg Mortenson— who made me feel a bit star-struck, despite his calming presence—and James Pruett, Former Chief of the Library of Congress Music Division. Dudley Herschbach, 1986 Nobel Prize winner in chemistry, asked Mr. Mortenson if he'd like a cup of tea, or perhaps three. That got a good chuckle. Around the breakfast table sat past and current winners of the Legacy Prize, awarded annually to high-school and college students who excel in their chosen fields, ranging from music composition to nanotechnology. Invention and innovation encompass all disciplines—another tenet of Lemelson Center programs and research. 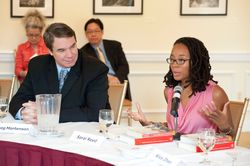 To open the Round Table discussion itself, Laurie Kahn, renowned filmmaker and Chair of the Foundation, broached this topic: Much of creativity (and much of Mr. Mortenson's remarkable work) depends on listening, asking the right questions, and being able to see things differently. Where do these skills come from?

Mortenson replied that humility is a key part of listening. "Listen with your heart," he said, and trust your intuition, not solely your logic. He suggested that knowing and trusting one's intuition is "hard for Western kids," many of whom are raised to be in complete control of their environment, and to feel entitled to that control. They expect to go to school, for example, or to be able to play outside in safety.

Resourcefulness, risk-taking, and problem-solving are important elements of the creative process. A good mentor, even one's peer, can engender creative awareness. "When people ask you a question or ask how to solve a problem," Mortenson advised, "be hands-off so that they can figure it out using resources and thinking creatively."

The youth around the table talked about challenging prejudice. They shared personal experiences of feeling different or excluded because of their cultural or socioeconomic background. They talked about ways to foster empathy. Mortenson encouraged them to listen to people's stories. Truly listen.

Later, Laurie Kahn asked the group, "How do you sustain creativity?" Mortenson's own experience taught him to take care of himself physically, emotionally, and mentally. Pursue whatever knowledge you wish to gain, he said, and tackle whatever problems you want to solve, but "take care of yourself" along the way. "Be in touch with yourself," he said. (That includes embracing all the nutty ideas you have in the shower.)

"Don't just think outside of the box," Mortenson added, "live outside of the box. Take risks. Don't be afraid to fail. Failure is wonderful." Indeed, it often leads to solutions and ventures one never predicted.

Of course you don't have to be famous or young or "gifted" to be innovative, but the Creativity Laureate and Legacy honorees are an inspiration, bringing together creative minds across disciplines and across generations to show what greatness can come from following your passion.

And as for the next generation of innovators? Mortenson said, "The future is in good hands." I'm inclined to agree.

What about your creative process? Tell me about it in the comments below. And stay tuned for a Lemelson Center podcast with Alice Zhao, one of this year's inspiring Legacy Prize winners. 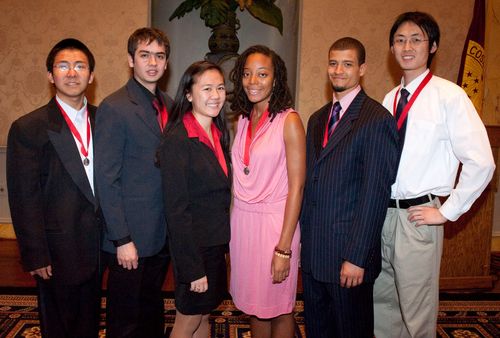 Amanda Murray is Project Assistant for the Lemelson Center for the Study of Invention and Innovation.