Editor's Note: The goSmithsonian Trek app was only open through July 24th, 2010, and is no longer available. 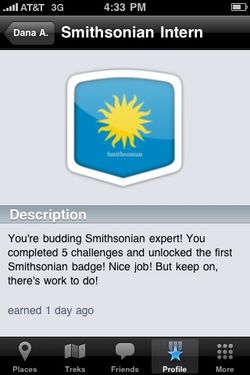 After completing my first few tasks, I became a virtual Smithsonian Intern!

What did I do on Wednesday morning? I went on a “goSmithsonian Trek”! When I began my internship at the National Museum of American History last month I knew that I had variety of responsibilities, but I never knew that going on a scavenger hunt would be part of my job description. Beginning on a rooftop in downtown D.C., I joined a few dozen Smithsonian employees in testing a new smart phone scavenger hunt around the Smithsonian Institution.

The goSmithsonian Trek is an interactive game in which museum visitors must decode clues, complete challenges, and find artifacts in nine Smithsonian museums. The game, powered by the Boston-based SCVNGR, can be played for free from any smart phone by downloading the SCVNGR application from the iPhone App Store or Android Market. The game runs through July 24. 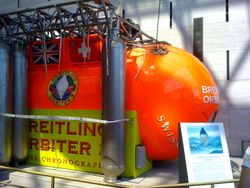 Haiku: Encased in bright red, Switzerland to Africa, Floats like a hot dog. (Sadly, we don’t foresee any Pulitzers in our future.)

iPhone in hand, I set out to complete some of the scavenger hunt tasks, questions, and riddles that can only be answered by exploring the museums, exhibits, and objects. I began by exploring Milestones of Flight at the National Air and Space Museum (NASM) to answer clues relating to Apollo 11 and the Mercury Friendship 7. I also picked an object about which to write a haiku. The Breitling Orbiter 3, the first balloon to fly non-stop around the world, caught my eye. My colleague, Dana Allen-Greil, and I looked closely at the artifact and the information on the gallery label to craft our poem and hit .

Leaving the Air and Space museum, I headed towards the National Museum of American History. As I walked, I saw that the Trek included challenges that could be completed on the Mall itself. Posing with the Washington Monument, exploring the carousel, and “supporting Congress” were on the agenda. 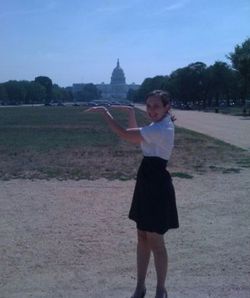 The “Support Congress” challenge prompts you to take a picture of yourself lifting up the Capitol building.

I arrived at the American history museum ready to embark on more tasks and explore the museum that has become so familiar to me. The scavenger hunt directed me through some of the most popular exhibitions—the Star-Spangled Banner, Abraham Lincoln: An Extraordinary Life, First Ladies at the Smithsonian, and National Treasures of Popular Culture helped me to discover the treasures housed within the museum. But my favorite thing about the Trek was looking at the museum in a different way.

I only played with the application for about an hour, but I hope to be able to explore more of the Smithsonian Institution in the coming weeks. 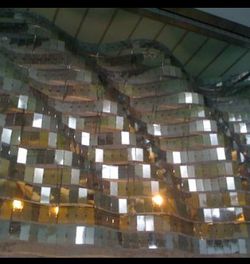 To complete my final task at the National Museum of American History, I went on a hunt to find a sunburst, an interpretation of the Smithsonian sunburst logo.

And now it’s your turn! Check out the upcoming one-day only contest at the Castle Commons this Saturday, June 26. Registered visitors will square off in a four-hour timed competition that is open to all comers. The top two players who garner the highest points and complete all of the challenges—haikus, photo assignments and a final tie-breaker—will receive an Apple iPad! (RSVP here.)

If you can’t make it on Saturday, don’t fret! You can try the Trek anytime before July 24, 2010. If you’re any good, you might earn the “Smithsonian Intern” badge! (Hmmm, if I had known it would be that easy…)