Putting a face to the invention

One of the best ironic gifts I ever received is a paper bag vase. It’s a ceramic vase in the classic, flat-bottomed shape and classic brown of an everyday paper bag. Even the wrinkles look realistic.

Until the late 19th century, there was nothing classic or everyday about the flat-bottomed paper bag. For a long time, paper bags were more like envelopes. Margaret Knight, a factory worker from Massachusetts, identified a need and designed a machine for making square paper bags at a time when it was very difficult for women to obtain patents in their own names. After a hard-won legal battle against Charles Annan, who copied Knight’s idea and tried to patent his own, strikingly-similar machine, Knight earned a patent for her Paper Bag Machine in 1871. 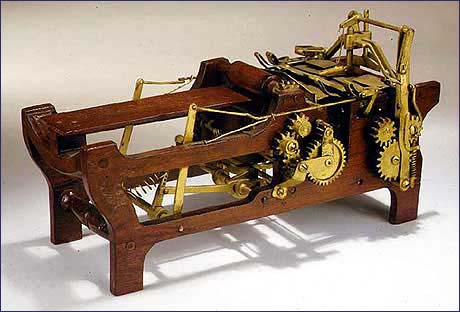 But this is not a post about paper bags. It’s about what we can learn when we humanize invention stories—when we put people first.

This was one goal of the Lemelson Center’s Spring 2010 collaboration with three departments at American University—History, Performing Arts, and Film and Media Arts—to enliven stories of women inventors through first-person interpretation. This work was truly interdisciplinary.

If you’ve seen programs like Join the Student Sit Ins at the Greensboro Lunch Counter, or Letters Home, then you’ve seen the museum’s historic theater program in action. Yet for the Lemelson Center, the process of translating inventor biographies into public performances was largely uncharted. The Center hoped to learn about this process from other Programs staff, highlight the often-underestimated contributions of women inventors, and provide a meaningful learning experience for collaborators beyond the museum.

With these goals in mind, the Center hosted a hands-on, collaborative project for graduate students in the practicum course led by Kathy Franz, Associate Professor and Director of Public History at American University. Practicum projects, hosted by cultural institutions around the city, enable students to learn public history by doing it. Franz said, “Working with the Lemelson Center gave students the perfect opportunity to grapple with how to create meaningful public history that builds on the stories of women inventors, makes the past accessible, and serves the mission and educational goals of an institution.” 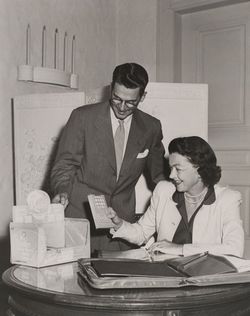 Marion Donovan displays a package of Boaters in 1951, on the day she sold the rights to her diaper cover invention to Keko Corporation for $1 million. Source: Marion O’Brien Donovan Papers, Archives Center.

With input from Lemelson and Archives Center staff, four of Kathy’s students chose to research and interpret the personal stories behind two “everyday” inventions represented in the museum’s collections: the flat-bottomed paper bag (specifically, the machine to produce such bags) and the waterproof diaper.

Jordan Grant and Kelly Gannon developed a play highlighting Margaret Knight’s invention process and patent infringement case, a landmark lawsuit for women inventors. James Nelson and Erin Molloy dug into the Marion O’Brien Donovan Papers, 1949-1996, to explore her solution to the problems of cloth diapers and rubber baby pants common to the 1940s. Although she lived generations later than Margaret Knight, Donovan encountered plenty of similarly gender-based stereotypes; women didn’t do science and technology. Donovan became her own best marketer, and her “Boater” diaper flew off department-store shelves. Both Donovan and Knight became prolific inventors in their time.

How did this project work? Lots and lots of communication! Along with a genuine desire to collaborate, despite busy schedules and other challenges. On the museum end, Lemelson Center staff suggested background readings and possible characters, Education and Programs staff hosted workshops in informal education and historic theater, and staff across several departments reviewed script drafts and offered feedback throughout the semester.

In addition to learning from museum staff, the students gained invaluable insights from Caleen Jennings, American University Professor of Theatre and Chair, Department of Performing Arts, into the process and craft of translating archival research into performance. The museum became a lab for experimentation in playwriting. 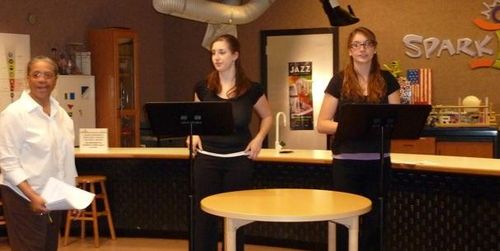 “For history students to learn playwriting, for actors to build characters straight from archival material, and for a documentarian to capture the pieces and tell the story,” Jennings said, “that’s what a university education does in the very best circumstances. I think the students also learned from watching Kathy Franz, Maggie Stogner, Amanda Murray, and me problem-solve on the spot: organize schedules, maintain good communication, obtain permissions, and set deadlines and rehearsals—the nitty-gritty work that creates the foundation for a project.”

On May 3, for a final performance arranged at the museum, American University actors Jordan Van Clief and Rachel Silvert gave a dramatic reading of the final scripts while Jen Collins, graduate student in Film and Media Arts, filmed the performance as part of her own semester project, mentored by Maggie Stogner in the School of Communication. 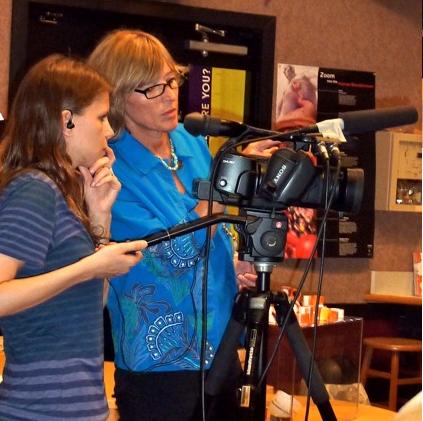 This project provided a great foundation for future Lemelson Center forays into historic theater. I hope the project sparks future interdisciplinary collaborations. What inventor stories would you like to see brought to life? Tell us in the comments below!