The Technicolor world of Oz

Every day can be an adventure for the curators, specialists, interns, and volunteers who spend their days digging and researching in the museum's vaults. Sometimes you'll be looking for a certain photograph and find something totally unexpected. Other times, you know what you're looking for, but once you find it, you discover a much deeper and richer story than you thought you knew!

I recently had the opportunity to talk about one of the objects in the Photographic History collection for a documentary film crew, and thought I'd share some of the research I did for the shoot. The object of interest was the Technicolor DF-24 Beam Splitter Motion Picture Camera: in layman's terms, the camera that filmed The Wizard of Oz. While Curator Dwight Blocker Bowers has the enviable job of researching and writing about the actors, designers, and moviemakers who helped create the film, our primary interest in terms of Photographic History for this milestone of American cinema is the technology that brought it to life. 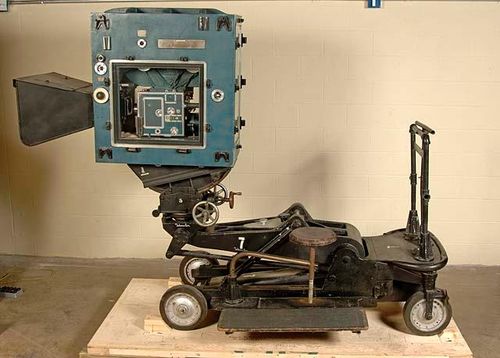 People often say that the thing they remember most about The Wizard of Oz is its bright, vibrant color. The yellow brick road, the ruby slippers, and Emerald City are so richly saturated with color on screen that it’s hard to imagine the film without it! Contrary to a common misconception, Oz was not the first film made in color, but it was one of the first to prove that color could add fantasy and draw audiences to theaters, despite its release during the Great Depression. The Technicolor Corporation had been in the business of making color movies since 1917, but the high cost and complexity of the method as well as the poor state of the American economy, kept color movies from becoming the standard for decades. 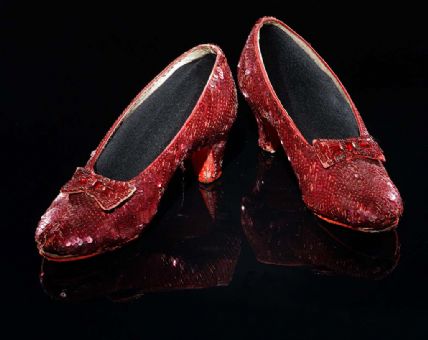 Technicolor wasn't a type of color film; instead, it was a process in which a specially modified motion picture camera recorded the same scene through colored filters on three different strips of film. These strips were then processed separately and used to "print" colors onto each finished print of the film sent to theaters. If a movie studio wanted to make a film in Technicolor, it had to lease the company's unique movie cameras as well as a team of two experts to help operate the complicated machine.

L. Frank Baum's 1900 book The Wonderful Wizard of Oz was so popular that it spawned thirteen sequels, several stage versions, and five films before MGM made the familiar The Wizard of Oz in 1939. In the late 1930s, the height of the Hollywood studio system, MGM had a reputation for quality movie musicals, and the film's producers decided to spare no expense to make Oz an unforgettable film. The museum's Technicolor camera is one of as many as eight that were used in the filming by MGM cinematographer Hal Rosson and his staff, including three Technicolor consultants. Technicolor filming required very bright light on the studio sets, and MGM spent over a quarter of a million dollars on electricity alone (for years after, the actors involved in the production complained of permanent vision damage from the intense Klieg lights). Scenery and costume designers were encouraged to use as much color as possible to take full advantage of the expensive format and to emphasize the difference between sepia-toned Kansas and the fantasy world of Oz, one of the reasons that Baum's silver shoes became bright ruby slippers in the film version. 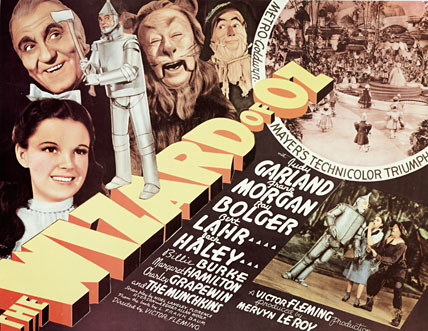 The Wizard of Oz poster (reprint of 1939 original).

The Technicolor camera in the museum's collection is a big, heavy piece of machinery, and a very different kind of object to work with for someone used to handling photographs. Nonetheless, it's evident under examination that this camera put its stamp on a national movie treasure. The camera's mechanical carriage gives it the ability to fully articulate and move smoothly, allowing the movie's cinematographers to create sweeping shots and follow the action as Dorothy, the Scarecrow, the Tin Man, the Cowardly Lion, and Toto journeyed down the yellow brick road.

The large "blimp" casing over the camera's machinery contained the noise of three strips of film running within to permit audio engineers to record Judy Garland and the other performers on set with true fidelity. For all the added cost, time, and effort, however, the Technicolor hues of The Wizard of Oz helped to make the movie what it is today, an American film classic. It's just one of the many stories that we're privileged to tell here at the National Museum of American History.

Part II: Five questions with Susan Hilferty, costume designer for "Wicked"
Susan Hilferty's costumes for the musical WICKED are part of a carefully crafted world, one that she envisioned "had... 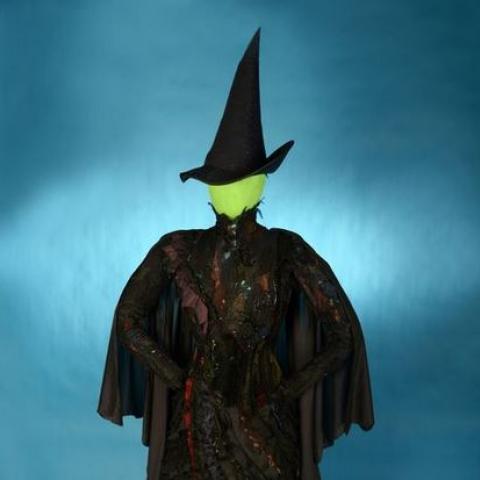