Vince and Larry dummies "crash" into the Smithsonian

Roger White is no Indiana Jones, but as an associate curator specializing in automobiles, he has hunted down his fair share of treasures. Since 1981, he has collected pavement from Route 66, Evel Knievel’s motorcycle, Iver Johnson’s Victory bicycle prototype, and a 1965 Ford Mustang coupe. But his efforts to track down the crash dummies “Vince and Larry” from the award-winning safety belt campaign proved more difficult than he could have ever imagined. 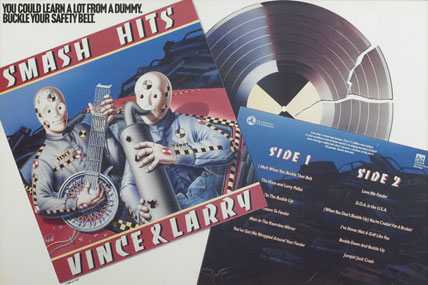 “I followed a trail of bread crumbs basically,” White says of contacting dozens of people who worked on the campaign. “There were art directors, producers, assistant producers, the wardrobe designer—a long list of people. And believe it or not, nobody knew where these costumes were.”

Twenty-five years ago this year, the loveably goofy duo known as “Vince and Larry” debuted in television, print and radio ads nationwide. The public-safety announcement (PSA) broke the mold with its humorous approach to a serious problem: thousands of Americans were dying each year in auto accidents because they didn’t buckle up. When the U.S. Department of Transportation and the National Highway Transportation Safety Administration partnered with the Ad Council in 1985 to address the issue, they turned to the Leo Burnett ad agency to reach consumers. 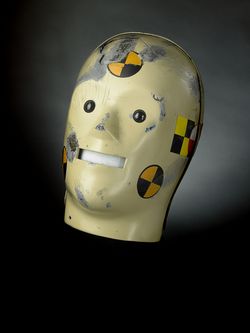 Jim Ferguson and Joel Machak, then working in Leo Burnett’s Chicago office, came up with the idea of dummies come to life. “Originally, it wasn’t supposed to be funny,” says Ferguson, who wrote the campaign’s famous tagline, “You Can Learn A Lot From A Dummy.” “It was originally supposed to be these dummies who were hiding and were being dragged into these cars unwillingly because they knew what was going to happen: they would go through the windshield, lose an arm and a leg.” But Machak suggested a different, more light-hearted approach.

“Nobody had ever tried to do anything funny with stuff like this,” Ferguson said. “Usually PSAs are shocking and gory, so we thought, what if we had these guys love their jobs?”

The campaign, though unorthodox, was an immediate hit. In 1985, it won the advertising industry’s prestigious Addy award, followed by a Cannes Film Festival Bronze Lion, and two CLIO awards in 1986 and 1987. The dummies became ubiquitous, appearing in commercials and advertisements across the country. In 1992, a New Jersey toy manufacturer even introduced action figures of the same name. Like McGruff the Crime Dog and Smokey the Bear, “Vince and Larry” became cultural icons of the safety sort.

“These commercials undoubtedly saved millions of lives, and really they’re comedy classics in and of themselves,” White says of why he spent nearly two years locating the costumes and the campaign’s creators. “Without the enormous talent that went into them, they wouldn’t have been as effective.”

After contacting Ferguson and Machak, White flew to California to meet Wanda Watkins, the wardrobe designer who created the iconic costumes, who in turn led him to an assistant producer on the campaign, Lynn Pateman, who recalled putting the costumes and masks into wooden crates and shipping them to a warehouse in Los Angeles. Pateman even remembered the name of the man who received them. “I thought a-ha! A golden clue!” White recalled. 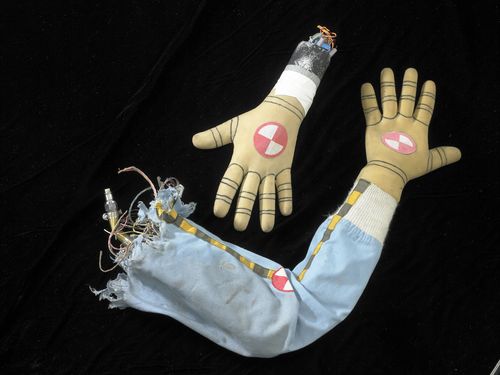 The warehouse manager was Al Lapides, who’s been with Leo Burnett for 43 years. Lapides knew they were historic, and had kept them in the same place since the campaign officially ended in 1998. “In other words, the costumes were never missing. They were exactly where they were supposed to be,” White said with a laugh. “It’s just that the trail of authority from NHTSA down to Wanda Watkins was such a long string that nobody knew. And all I had to do was look at every piece of the string to figure out what went where.”

When White contacted Ferguson to say the costumes had been located and would indeed be joining the Smithsonian’s collection, Ferguson was thrilled.“Creative guys brag about a lot of stuff — ’I’ve won this award, that award’ — but nobody’s done this. It’s the Smithsonian, for Christ’s sake! It’s a great honor to be recognized by our national museum,” Ferguson said. “The awards will go away, but this is the Smithsonian.”

Last week, the Vince and Larry costumes officially became part of the National Museum of American History collections, along with seat belts, real crash-test dummies, alcohol detection devices, and other objects that illustrate the evolution of automobile safety. Watch as Vince and Larry “crash” into the donation ceremony in the video below.

Molly Stephey is a Smithsonian volunteer who assisted the Office of Public Affairs at the National Museum of American History on promoting the donation.