"Who Will Chop Your Suey When I'm Gone?" 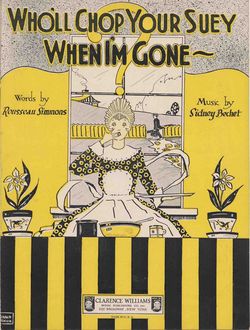 Can you believe that chop suey was once the most famous Chinese dish in America? The dish’s popularity helped fuel the growth of Chinese restaurants throughout the U.S. during the early 20th century. But its heyday has long since past. Today you hardly ever see it on the menu let alone in popular songs.

As super research specialist Noriko Sanefuji continues her collecting adventures, this month we sought all things Chop Suey and our research led us to Hawai`i. Why Hawai`i? It has one of the largest and oldest Chinese communities in America. Most of the Chinese immigrants in Hawai`i arrived in the mid-to-late 19th century; many came as contract laborers to work on sugar plantations. After their contracts expired many Chinese immigrants opened businesses in an area which later became Honolulu’s Chinatown.

One of the local Chinese restaurants Noriko visited, which has been in existence for over half a century, is Tasty Chop Suey. She met with Mrs. Liu, the current owner, who took over the business in 1985. 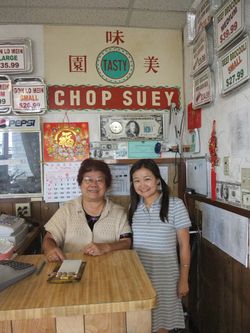 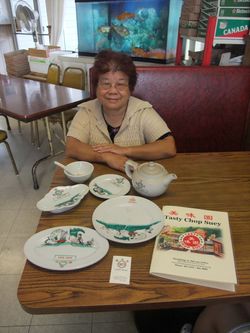 Miraculously, she had kept a few samples of the original dishware with restaurant logos, and she generously donated them to the museum along with a current menu. 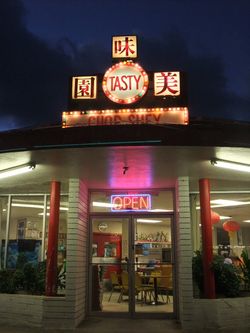 Tasty was opened in 1956 by the Wong family. Mr. Wong served in the U.S. Army as a cook during World War II. After the war, he worked at several Chinese restaurants as a cook before opening Tasty. During the 1960’s, due to a freeway being built, they had to move to the current location. Fortunately, they kept the original neon sign and logo. Noriko also talked to Dennis Wong, the original owner’s son. Dennis had saved not only the original menu of Tasty but also chopsticks and a few other items with Tasty Chop Suey’s logo on them. The best part of Noriko’s trip might have been discovering Tasty’s original slogan, “Hungry for God’s word–Go to church! Hungry for Chinese food–Come to Tasty Chop Suey!” Now that is something you can sink your teeth into.

The exhibition team considers itself lucky to be collecting such wonderful objects from across the country. We have had success in New York City, Washington, D.C., Los Angeles, and Hawai`i. Now we are setting our sights on one of the most important cities for Chinese food in America, San Francisco.

Would you like to be a part of our search? If you know of an object that can represent the Chinese restaurant story, especially if it’s from San Francisco or about chop suey, please let us know. You can use the comments below or email us with the subject “Chop Suey.” Flyers with more information in Traditional and Simplified Chinese are also attached below.