Back home in Britain, we have a lot of history. I’ve visited the Tower of London, Edinburgh Castle, and Westminster Abbey, and I’ve grown up surrounded by history dating back to William the Conqueror. That is my history. So it’s probably a fair question to ask why and how I find myself 3,000 miles away from home in a museum dedicated solely to just a few hundred years of American history. I’ve never been able to put my finger on what it is that makes me love American history so much, but eight weeks of working at the Smithsonian and living in the United States has made me think about it. 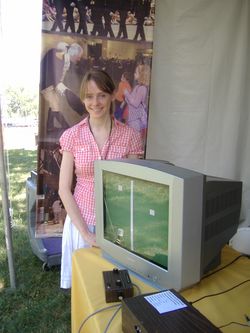 Hannah at her booth during the Folklife Festival.

The nation’s history is celebrated in the United States in a way that it simply isn’t in Britain because, I think, that history has become intrinsically linked with the American experience and identity. I see it, without a doubt, whenever I walk through the National Museum of American History. I have found that there is a sense of being in touch with the story of the nation and a sense of pride in the values upon which it was founded. My amazement at the sheer number of American flags flying around the city was met with great surprise from my American friends for whom it seemed perfectly normal.

The U.S. may be a young country (in fact, even my university is three times as old!), but, in my opinion, it is one characterized by dynamism and pride. This is something which I have come to realize exists not only in the American past, but in the United States today. I witness it when I see people place their hands on their hearts as the Star-Spangled Banner is sung at the start of a baseball game. I felt it in the good-natured hissing and booing as the grievances in the Declaration of Independence were read out on the Fourth of July (while I, admittedly, felt a little sheepish). For the first time, the Fourth of July was more than just another day: it became a day of national celebration of simply being American. I had no idea that there were so many patriotic songs (although, granted, I was surprised when the marching bands started playing my national anthem which, as it turns out, is the same tune as “My Country ‘tis of Thee”) or that so much paraphernalia that could be emblazoned with the stars and stripes. As an outsider, I couldn’t help but be inspired and moved by watching the sheer joy and pride of everyone around me engaging with their own history as a fundamental part of what it means to be American. My overall impression was that here history is lived, not just remembered. It means something to people in a way that, sadly, I fear many people have forgotten at home. 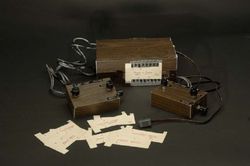 The "Brown Box," a 1967 prototype for the first multiplayer, multiprogram video game system.

In my opinion, this is also what sets this museum apart: the celebration, rather than just the preservation, of history. Here, history becomes as much about the people who walk through the museum doors as about the objects behind the glass. Nothing demonstrated this to me better than the day I spent working at Smithsonian Inside Out as part of the Folklife Festival. Standing on the National Mall with a working replica of the first video game system, the Brown Box, I could see the fascination of both children and adults as they came to the table not only to play the game, but to find out the story behind the object. The Smithsonian is special because it creates links between the objects stored in the “nation’s attic” and the nation that they belong to. I see the National Museum of American History as the people’s museum: it both celebrates and belongs to the American people. Personally, I admire this sense of pride and the celebration of history, and I find it inspirational.

This is why I love American history. I hope that, one day, a similar sense will find its way back across the Atlantic. And as long as the Smithsonian is around, I hope that it will continue to ensure that the history of the people, by the people, and for the people, shall not perish from the earth.

Hannah Grenham is an intern at the National Museum of American History.