Making "Music for The World of Tomorrow"

Editor’s note: This post, written by Ryan Holladay, member of the D.C. music collective Bluebrain, is second in a series about Bluebrain's collaboration with the Lemelson Center. You can view video of Bluebrain’s performance in the previous post, A no-brainer collaboration: "Music for the World of Tomorrow."

Last year, a friend gave me a vintage brochure she unearthed at a used bookstore in Brooklyn. The brochure was an immaculately preserved visitor’s guide from the 1939 World’s Fair in New York. It was an incredible find, encased in plastic, with full color pages, tactile fabrics, and pop-up displays. Living in New York for seven years, I’d developed a real love for the former World’s Fair grounds in Flushing Meadows, with their now-rusting structures that were a focus of international attention for several months in 1939 and 1940. 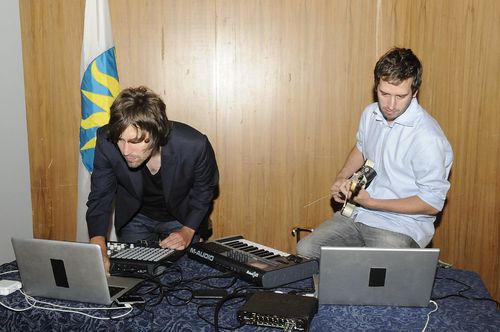 So it seemed too perfect when Hays (my brother, and the other half of Bluebrain) and I were approached by the Lemelson Center for the Study of Invention and Innovation’s Amanda Murray about the possibility of scoring silent film footage from this particular World’s Fair for the Center’s National Inventors Month Festival last August.

With the help of Wendy Shay, Amanda and I selected and viewed raw footage in the museum’s Archives Center, and then Hays and I, with our friend Joshua Vaile, edited a copy of that footage down to about 20 minutes. Although it was difficult to cut any of the material, Hays and I decided to focus primarily on the scenes recorded in color. The World’s Fair’s flashy dancers, flag wavers, fireworks, and auto shows seemed best enjoyed in vibrant hues.

The more difficult task was composing a musical score to accompany the film cut. This sounded simple at first, with so much visual “eye candy” as our springboard. We quickly realized that composing music without a cohesive or singular visual narrative is not easy.

Hays and I have some experience scoring films. We love the process of responding to visual storytelling and creating music that complements and furthers that story. What we learned in scoring the World’s Fair footage was that, when film lacks a narrative, suddenly sound instead of sight is guiding the viewer’s emotions. This took some getting used to. You might assume, for example, that seeing synchronized swimmers bounce colorful beach balls (at the Fair’s dazzling Aquacade) would evoke excitement regardless of musical accompaniment, but we discovered that a sour note or minor chord took our feelings, and the tone of the scene, in a different direction.

Our own emotional responses certainly come across in the final score, shaping how the audience perceives the moving image, but we hoped the film alone would evoke wonderment as well. The challenge for us was to write music that enables the audience to appreciate the footage for what it is—-raw, with no narrative arc, no plot, no heroes or villains, no story line. 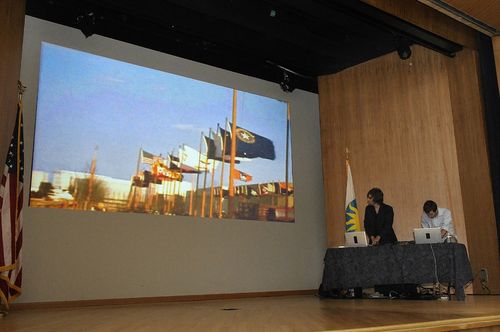 Ryan and Hays performing at the National Museum of American History.

Somewhat surprisingly, the process of writing and performing “Music for The World of Tomorrow” was one of the more moving things I’ve ever done. And I’m not entirely sure why. I watched the edited film probably 50 times before composing. Individual people and moments popped out at me, and I began to seek them out with each viewing: a dancer that falls out of a line with the choreography for a split second; a small Shriner car that drives into an open road. It was hard not to imagine back-stories for these characters.

One moment stands out in my mind more than any of the others, one that I waited for every single time and made a point of watching for while we were performing. It’s a quick shot, probably no more than 7 seconds, of what appears to be a father and his daughter, aged 10 or 11. They are seated together on a bench. He looks over at her as she arches her head back slightly, her eyes closed, smiling ear to ear. No words are exchanged. They are just sitting in the sun in what appears to be one of the happiest moments I’ve seen captured on film. It choked me up each time I saw it, maybe simply because a heart-warming scene has been immortalized thanks to a hand-held camera. Or perhaps it’s the idea that this private moment of seeming joy has likely never been viewed by anyone in over 70 years. Her smile made me smile every time I watched. And maybe that’s just it: the idea that one single smile on a park bench in Queens in 1939, one that probably went unnoticed by anyone at the time, can make someone else smile generations later.

It’s nice to think that the National Museum of American History, which is home to artifacts representing some of America’s biggest moments, is also a repository for some of the everyday ones, too. The original footage will continue to live in the Archives Center as part of the Edward J. Orth Memorial Archives of the World’s Fair. I can only hope that sometime in the future, someone will discover our humble contribution, listen, and smile.

Ryan Holladay is one-half of Bluebrain, a D.C. music collective, with his brother, Hays.