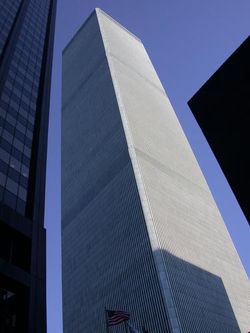 What I remember about the early morning of September 11 was how beautiful it was--bright blue cloudless skies and a gentle breeze were signs that Washington’s oppressive summer heat was waning and a glorious fall was about to begin. Since it was Tuesday, many of us on the staff were sitting in the auditorium, waiting for a museum-wide meeting to start. The deputy director came into the room and said that the director was on his way down, he was just checking to make sure we were all safe. What?  Five minutes later, the director arrived with the terrible and frightening news of planes hitting the World Trade Center and the Pentagon.

We headed back to our offices, where we were told to sit tight, though many supervisors decided that “non-essential employees” could go home if they wanted to. We didn’t know if the Metro was running or if streets were closed to traffic. People were on the phone and internet, trying to get the latest news and check in with loved ones. Rumors were running wild—that there was a bomb at the State Department, that the National Mall was on fire. I lived close enough to walk home, so I put on my sneakers and left. Keeping my eyes on the sky, I avoided my usual route past the White House and walked through a quiet neighborhood instead. The streets were jammed, but there was no honking, no panic. You could see fear and bewilderment in the eyes of passersby, but everyone was kind and helpful. 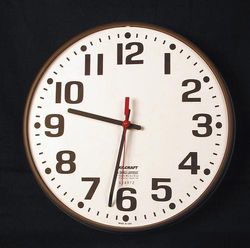 This clock was knocked to the ground by the impact of American Airlines flight 77 crashing into the Pentagon at 9:32 a.m. The clock was six minutes slow.

Some of my colleagues stayed in the building until later in the day: curators stayed to ensure that our collections were safe; security staff stayed to protect the building and the people still inside it, and to coordinate any emergency response. Others stayed because they couldn’t get across the bridges to go home, or wanted to avoid the crowds on the Metro. From the museum's fifth-floor terrace they could see smoke billowing out of the Pentagon.

My story that day was—fortunately—an unremarkable one. I made it home, hugged my husband, called my family, sat glued to the TV, sobbed. I called my intern—who was supposed to start on the 12th—and told her to hold off for a week. We didn’t know when the museum would reopen to the public, or when we would even be allowed back in the building.

We were back at the museum the very next day, but work was a small distraction from the deep sorrow and shock we were all feeling. The museum was busy that week, filled with business travelers from all over the world who couldn’t fly back home because of continuing flight restrictions. When the skies reopened, the museum emptied, and we were left to consider how we would respond to the national tragedy. 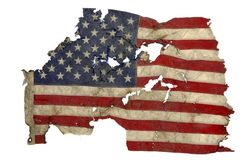 Historians and curators discussed how to collect and preserve tangible materials from this shattering event, trying to balance the urgency to document the ephemeral aspects of the moment and the need to provide some long-term historical perspective. Our curatorial staff began a process of researching, collecting, and listening that continues today.

On December 7, 2001, Congress directed the National Museum of American History to become the official repository for objects related to September 11. The collection includes items from the sites in Washington, New York and Pennsylvania, as well as the national response from around the country. The objects tell amazing stories of heroism, fear, community, and sorrow. The collections will grow as we gain historical perspective and a greater understanding of the events of September 11.

How did you witness history on September 11, 2001? What do you most remember, and how has it affected your life?  Help the Smithsonian document this historic event by sharing your September 11 experience with us. We’re interested in everyone’s experience, no matter where you were or how directly you were involved.  Please share your story and read about the experiences of thousands of other people on our September 11 collection website.