Editor’s note: This is the second in a two-part post. See yesterday's post for the background on this story.

The hard science of cholesterol was also going to be a hard sell. Time to turn to the Internet (a surprisingly important tool for the curator, I’ve learned!). A quick search immediately reminded me how the specter of cholesterol has influenced our everyday lives, and how much material culture it has left behind. It’s true that for the first half of the twentieth century interest in cholesterol was largely confined to laboratory scientists, but as early as the 1930s newspapers carried ads for beauty products that claimed to contain cholesterol, apparently considered good for the skin. A few prescient cookbooks taught housewives in the 1950s how to make healthy, low-fat dishes for their husbands. These were soon followed by special safflower oil preparations, served in food or taken as medicine, thought to reduce blood cholesterol levels. Videos from the 1980s and 90s instructed doctors and lay people alike about the perils of high cholesterol and ways to reduce it, while the National Cholesterol Education Program, established in the mid-1980s, spread the word about cholesterol with dozens of posters and other resources. The Nutrition Labeling and Education Act of 1990 required cholesterol content to be indicated on food labels. Entire product lines are now constructed and marketed as “cholesterol-lowering.” My trips to the grocery store haven’t been the same since I started this project. Cholesterol is positively leaping off the shelves. 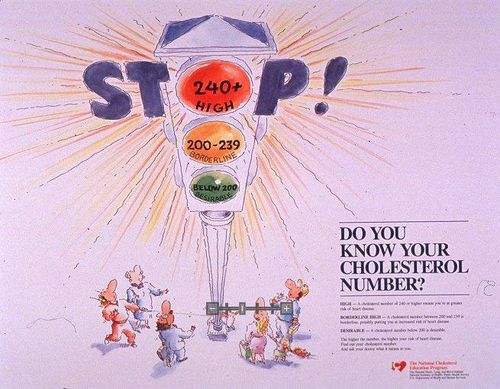 I’ve also accumulated a “wish list” of surprising everyday objects from the past. Who would have thought to preserve a corn oil bottle from the early 1960s? A box of frozen egg substitute from the 1970s would be a tremendous find indeed. This is the challenge for a curator who specializes in items relating to daily life–why would anyone save such objects for posterity? Who is to say what will have historical relevance? Contemporary life often seems so mundane, so quotidian, that no one bothers to preserve the items that constitute and represent it. Curators are left to dream of warehouses crammed with samples. 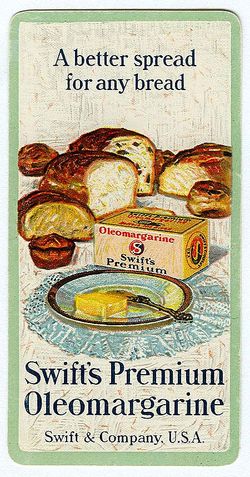 But these objects alone on display would not be enough. Museums have to balance competing interests: the desire to educate, the obligation to entertain, and the curatorial responsibility to elucidate; that is, to uncover historical patterns and trends, and maybe even make new discoveries. Fortunately, these cholesterol-related objects also act as the entry points to vibrant historical issues and debates, as well as the hard science. Egg substitutes bring up questions about the importance of dietary cholesterol compared to that synthesized by the body, questions that continue to preoccupy laboratory scientists, doctors, and dieticians. A simple tub of margarine fortified with plant esters might be at the center of a debate about the definitions of “foods” and “supplements.” Material culture is as much cultural as material. In the case of cholesterol, these daily objects are deeply grounded in and indicative of a popular health concern, maybe even a national obsession. Combining a familiar product with focused interpretation will educate and elucidate, and may even be surprising enough to entertain as well. In the meantime, I will continue looking for artifacts and listening to the stories they have to tell.


Editor’s note: What everyday objects have you kept for posterity? Why did you decide to save them? What do they tell you about the past? Share your thoughts in the comments below.

Caroline Lieffers is an intern in the Division of Science and Medicine at the National Museum of American History.