"So whatever will happen": Music celebrates Haitian cultural identity

In the French Creole language, the song “Alayon bon peyi se Ayiti,” by Haitian composer Moise Abraham, can be translated “So whatever will happen.” Come balmy breezes or roiling earthquakes, Haiti will face whatever. “It will be paradise,” said David Cesar, director of the Les Petits Chanteurs choir and chamber music ensemble of the Holy Trinity Music School, Port-au-Prince, Haiti. 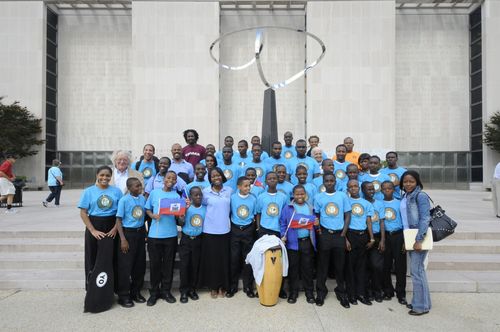 On September 17, Mr. Cesar and retired Episcopal priest Stephen Davenport brought 30 school children and young men representing the 87-year old school destroyed in the January 12 earthquake to the National Museum of American History. Their performance was a whistle stop on a 30-day, 40 city goodwill tour to raise support to rebuild the school (which had 1,000 students and 45 full and part-time teachers), thank U.S. patrons, and communicate the resilience and renewed hope of the Haitian people through these celebrations of Haitian musical culture. 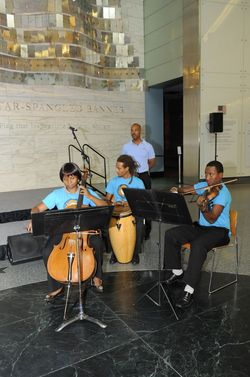 The Smithsonian Institution is leading an effort to help save Haiti’s cultural heritage with leadership from Richard Kurin, Under Secretary of Art, History and Culture, and Johnetta Cole, Director of the Smithsonian African Art Museum, sponsors of the exhibition “The Healing Power of Art: Works of Art by Haitian Children after the Earthquake” at the Dillon Ripley Center.

The children danced and performed traditional Haitian compositions and classical music “the Haitian way,” presenting the beauty and variety of the island culture. Earlier in the day museum director Brent Glass welcomed the crowd to “your national American history museum” and recognized Dr. Cole. Flag Hall, the space outside the Star Spangled Banner exhibition, “is our public square… a place where human connections and ideas are shared,” he said.

As the children sang the upbeat, Calapyso-like folk song representing “So whatever will happen,” they reached out and connected with the audience. People cheered, clapped with the beat, and danced in the aisles or their seats. The message communicated by performers and audience was clear: Haiti would be reborn. 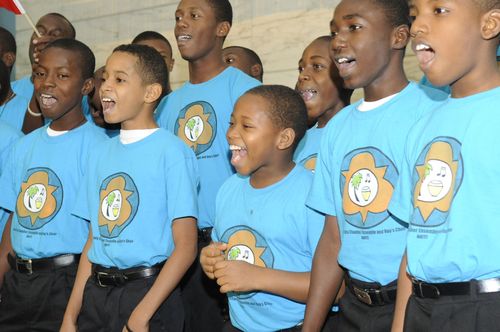 “The program was wonderful! Very reviving,” declared Marjorie Placide Impraim, a Haitian woman visiting the museum for the first time with her four children, mother-in-law Edna Impraim, and a friend who brought her five children. Edna Impraim remembered visiting the museum years ago and said she felt summoned to return by this program. Another Haitian woman who came from Silver Spring for the program said “Haitian friends told me about the program and said I had to go. And when Haitians call, you go.”