Stories of the Mexican Revolution

Curators use objects to tell a story about an event, a period of history, a person, a group of people, or a movement. Because we have a limited amount of space and words, the challenge is to communicate provocative stories clearly and concisely.

As an example, I recently curated a small history highlights exhibition case for the anniversary of the Mexican Revolution. The Revolution spanned twenty years, involving two nations and several colorful public figures. The Revolution encouraged the development of music and culture, changed the everyday lives of people, and had political and social repercussions that continue today. I had to figure out how to fit twenty plus years of Mexican AND American history into ten feet, making hard decisions as to which objects were selected and which left out. To tell this story and explain its importance, I searched the collections for anything related to the Mexican Revolution: U.S. business interests in Mexico, immigration history of the period, images, border history, President Woodrow Wilson, Mexican President Porfirio Diaz, Pancho Villa, and many other related people and topics.

I wanted to show the interdependence and interconnectedness of Mexico and the U.S., especially during the late 19th and early 20th century. The U.S. had many mining, oil, and railroad interests in Mexico at the time. Protection of economic and political interests drove the U.S. to intervene in Mexico both politically and militarily. The rural Mexican poor wanted redistribution of land, while others in Mexico called for a more even distribution of wealth. The resulting violence caused mass migration from Mexico to the U.S., creating strong communities of Mexicans and Mexican Americans. 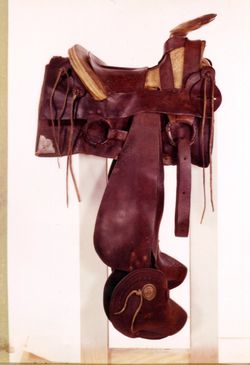 But the Mexican Revolution cannot be boxed neatly into a specific time frame or place. Events occurred on both sides of the border by many different groups of people. We cannot talk about all of the events in the space of a ten foot case, so here are a few stories I wasn’t able to tell about the objects in our collection.

One story is of Catarino Erasmo Garza. Garza was a revolutionary who moved to south Texas in the 1880’s and founded newspapers and mutual aid societies. He called for an end to both the Diaz regime in Mexico and to the abuse of Mexicans in Texas. By 1891 he and his men, the Garcistas, rode across the border from Texas in an attempt to overthrow the Diaz regime. Tensions were already high as Texas Rangers, protecting border ranches, were also very violent towards ethnic Mexicans. The United States Army was ordered to subdue Garza and he was chased and almost apprehended by Major John Bourke. This saddle belonged to one of the Garcista men and was picked up by Bourke after that confrontation. It was donated to our collection in 1896. 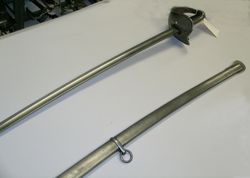 Another object I had to leave out was one related to the raid on Columbus, New Mexico. On March 9, 1916, Pancho Villa entered New Mexico, some say looking for supplies, others say to start a fight with the U.S. in order to draw them into war with Mexican President Carranza. Whatever the motivations, a deadly gun battle ensued killing several Americans and Mexicans and leading Villa to flee back into Mexico. General John Pershing was later sent in to apprehend Villa in Mexico. This international incident, where each nation invaded each other’s territory escalated tensions. This German sword and scabbard was said to have been picked up after the battle in Columbus. I could not confirm this story. It was donated to the Smithsonian by Postmaster General A.S. Burleson in 1921.

One other story I didn’t get to tell was that of the revolutionary, inventor, activist, and writer, Victor Ochoa. He started a newspaper in El Paso, Texas in the 1892 as a voice of Mexican Americans on the border, and like Garza, called for an armed revolution against Diaz. Ochoa was later arrested for a failed attempt to overthrow Diaz, for which he spent two years in federal prison. But Ochoa was also an inventor. In the 1890s he invented and patented hand tools, a fountain pen, brakes, and in 1909 he introduced a collapsible folding wing airplane, called the Ochoaplane. He spent another two years in Federal prison in 1917 for smuggling guns and ammunition into Mexico to aid the Revolution. We have a letter he sent from prison to his patent attorney asking about the status of his wrench patent. Ochoa might deserve an exhibition case all his own.

These stories from three distinct collections of objects are tied to the events and lore of Mexican and American history, and make up part of the larger story of the Mexican Revolution. But because an exhibit must tell such a large story that touches on economics, politics, as well as social and cultural legacies of the Mexican Revolution, I had to leave out some details that these objects tell. These stories, and the objects which convey them, give us a fascinating look into the culture, society, dramas, everyday events, and personalities who shaped history. If you have stories or objects relating to the Mexican Revolution I would love to hear about them.

L. Stephen Velasquez is Associate Curator in Division of Home and Community Life at the National Museum of American History. 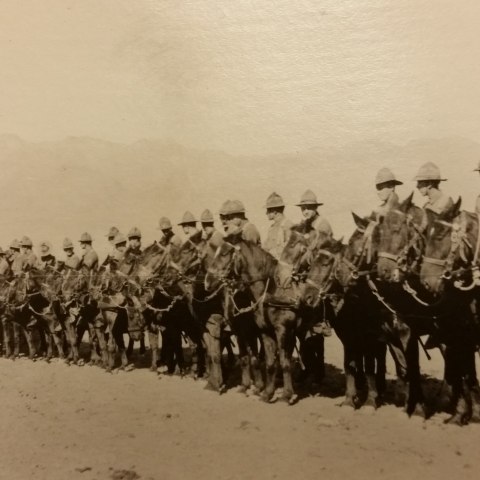 General Pershing's Mexican Expedition to capture Pancho Villa predates his World War I career
The small American town of Columbus, New Mexico, was the site of a major event 100 years ago today. On March 9, 1916, spurred by events in... 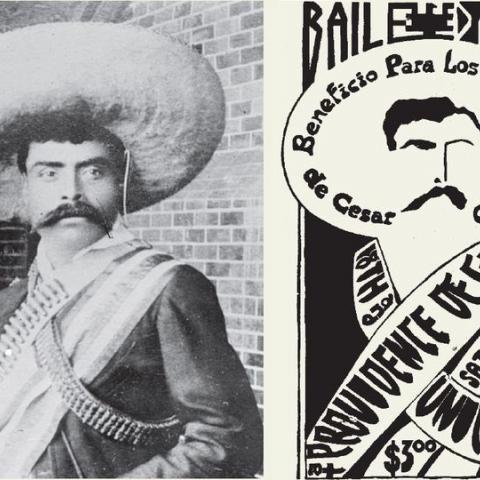