A tiny yellow doll's shirt: telling the story of immigration through objects

As chronicled in several of our past posts, the National Museum of American History regularly holds naturalization ceremonies in the Flag Hall. I recently had my first opportunity to visit one of these events. Witnessing people from a variety of religious, racial, and ethnic backgrounds become American citizens was a powerful experience, and gave me the opportunity to reflect on what it means to be American.

I was especially struck by Director Brent D. Glass’ comment that the immigration journey is one of the core stories of the American experience. As a museum that shares the story of America through objects, it is important for us to collect items that represent the story of immigration, and inspire a broader understanding of our nation and its many peoples. 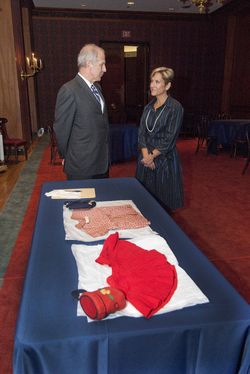 The museum recently accepted a donation of objects that tells the story of two young girls, Mariela and Maria Isabel, who journeyed with their family from Cuba to the United States in 1964. During the 1960s, political uncertainty in Cuba drove many Cubans to seek new lives in the U.S. and elsewhere, but leaving Cuba was a difficult process. Government representatives would come to take “inventory” of what property would return to the state, and those departing often left with only a few articles of clothing. The girls were not told that their departure was “forever,” just that they were going on a trip, but Maria Isabel vividly recalled how their bicycles, dolls, and other toys were taken. Mariela and Maria Isabel’s mother preserved the clothing they wore when they came to the United States, and Mariela donated those articles to the museum. The collection includes a small red skirt with coordinating red purse, and a white, red, and navy blue patterned blouse with a navy blue purse. Tucked inside one of the purses is a tiny yellow doll’s shirt. So, while her favorite doll had to stay behind, the little girl brought a tangible reminder of the toy’s existence. Similarly, the National Museum of American History collects objects to preserve a tangible reminder of the stories of those who have sacrificed to journey to America. 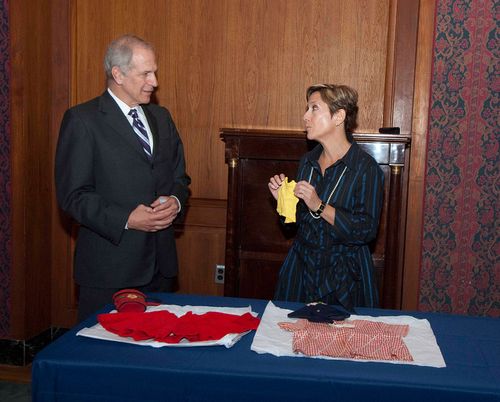 Do you or your family have a story of immigration? What objects would you choose to help tell your story? Please comment and share your stories.

Ben Miller is an intern with the New Media program at the National Museum of American History.