Hallowe’en? Putting the apostrophe back

Hallowe’en is one of America’s most popular holidays, for a variety of reasons. Although it has clear antecedents in the ancient Celtic festival of Samhain, if not in the ancient Roman festivals of Pomona (goddess of fruits and seeds) or Parentalia (festival of the dead), Hallowe’en apparently did not come into its own in the United States until the twentieth century. The museum’s collections contain examples of how the holiday was celebrated. 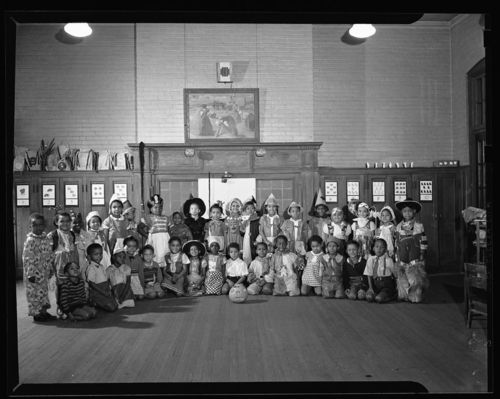 Wikipedia, of course, will tell you (nearly) everything you want to know about Hallowe‘en, including why I’m spelling it with an apostrophe. A “Retro Housewife” Web site about Hallowe’en in the 1940s, ponders that mystery, vowing later research. Despite the “pagan” origins and traditions of the holiday, it eventually was transformed into a Christian observance, closely linked to All Hallows Day or All Saints Day, November 1. All-Hallows-Even (that is, evening) is the night before All Hallows Day. The apostrophe in the earlier spelling of Hallowe’en denotes the missing “v” of “even.” You’ll find many “e’ens” in nineteenth-century and earlier poetry.

Perhaps I’m being an antiquarian and not au courant, but I’ll continue using the apostrophe in this blog. That doesn’t mean you have to, of course, as much as it pains me to say so. I favor retaining this character, since it makes it easier to explain the origin of the word. In contemporary culture, sometimes words which need apostrophes end up without them, and words like the plural pronoun “its” (as in “the car lost one of its hubcaps”) end up with an extra, unnecessary, clearly incorrect apostrophe (as in “it’s hubcaps”). Come on, people—“it’s” is a contraction for “it is”—it doesn’t mean anything else! And save yourself some keystrokes by not putting an incorrect apostrophe in every plural—as in train’s, plane’s, and automobile’s.

But I digress! With that spelling lesson off my chest, I return to Hallowe’en. The holiday has long been an occasion for parties for both adults and children. At the same time, there were reports of rampant vandalism and devilment in the late 19th century on Hallowe’en, and some historians believe that the custom of “trick-or-treating” eventually was advanced as a method of defusing vandalism. The implication is that if you “treat” costumed children to small gifts of candy, etc., they will agree not to subject you to any nasty “tricks.” On the other hand, there was also a custom of children performing “tricks” as entertainment at each house they visited, precisely in order to be rewarded with “treats.” Undoubtedly both explanations are true.

It appears that little or nothing was written until 1911 about the practice of children wearing costumes or disguises and begging from door to door on Hallowe’en. Trick-or-treating does not seem to have become widespread until the 1930s, according to our Wikipedia scholars, and the earliest documented appearance of the term in the U.S. occurred in 1934. 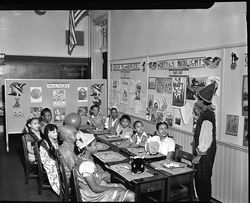 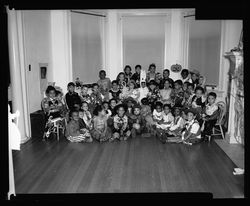 Undated photographs from the Scurlock Studio Records in the museum’s Archives Center show costumed African American children celebrating Hallowe’en; the images seem to have been produced in the 1930s or 1940s, but they are in many ways timeless examples of children enjoying themselves. The holiday is a sure-fire winner for children, tapping into their frequent desire to “dress up.” By contrast, the “Retro Housewife” site reproduces commercial imagery from the 1940s which suggest that adult parties and entertainment in theaters, ballrooms, and other commercial venues to celebrate Hallowe’en were more common at that time than they are nowadays. 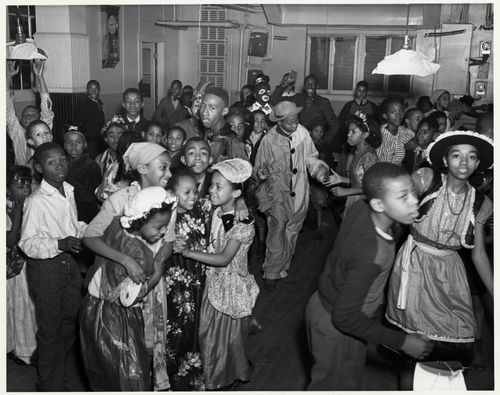 Note that the caption which Robert Scurlock wrote on the back of a print of the children’s party, probably in the 1960s or 1970s, retains the apostrophe in the name of this holiday: “Children’s Hallowe’en party / 12th Street YMCA.”

Editor’s Note: You can find more Halloween history and inspiration around the Smithsonian! For costume ideas, see The Bigger Picture, Eye Level, and Archives of American Art blogs. Find Halloween songs from Smithsonian Folkways, ghost stories from the National Museum of Natural History, museum-inspired pumpkin-carving stencils from Smithsonian Magazine, and more from the Around the Mall blog.