Memories of a wartime poster model

Editor's Note: This post was originally published on the Smithsonian Collections Blog as part of a 31-day Blogathon in October for American Archives Month. 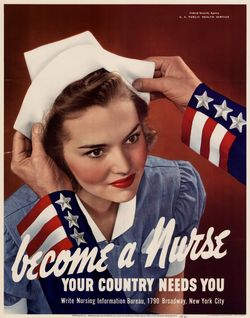 Poster, produced by the American Nurses Association, 1942. Model Weslee Price Wooten posed as a nurse with "Uncle Sam" for photographer William Ritter. From the University of North Texas Digital Library.

There are always surprises in my e-mail, but whenever I receive a postal letter, that in itself is a surprise. A letter from New Zealand addressed to “Archivist” was particularly intriguing. The writer, Ms. Weslee W. D’Audney, described herself as “coming up 83 and alive and well living in New Zealand.” She included a color copy of a World War II poster produced to recruit nurses, and said she had been the model for the photograph.

“These days the poster pops up everywhere on the internet, printed on all sorts of clothing from tee-shirts to thongs, on refrigerator magnets, wall-clocks, what-have-you, with claims it is a ‘work of art’ or an ‘enduring image on the national psyche’. Nowhere is credit given the photographer or the model. Perhaps I’m the only one now living who recalls the production of the poster.”

Wonderful, I thought: inside information!  She continued:

“In June 1942 I was a seventeen-year-old pre-med freshman at Barnard College in New York City. My maiden name was Weslee Wootten and I earned my university fees doing ‘Back to School’ fashion shows for the Fifth Avenue stores and other modeling. I received a call from the well-known commercial photographer William Ritter, with whom I worked previously on ads for [Jergens] lotion and Lux soap. When I arrived at the studio I was asked to put on a student nurse’s uniform. An older man was given navy blue gauntlets with white stars and red and white stripes, obviously made just for the shoot.

Mr. Ritter usually tried several compositions and took lots of pictures but this day he showed me a large pencil-drawn layout: Uncle Sam’s sleeves and hands reached to cap a nurse, whose face was blank. The layout was the work of the J. Walter Thompson advertising agency…and had been approved in Washington. Mr Ritter told me we had to follow the layout exactly, adding, ‘This one is important, it is big.’

Little did I expect the resulting poster to be so popular 66 years later! The photographer William Ritter and the model Weslee Wootten (D’Audney) need remain anonymous no longer.”

In a postscript, she added that she and her family visited the Smithsonian in 1958. Her sons spotted the “Become a Nurse” poster bearing her glowing young face, near planes suspended from the ceiling (presumably of the Arts and Industries Building). They excitedly reported, “Mom, you’re hanging in the Smithsonian!”

I wrote to Ms. D’Audney and said I was hunting for the copy of the poster that she and her family saw in 1958. My initial desire had been just to find a convenient location to record the information she had supplied, especially the names of photographer and model. My museum and archival cataloguing instincts suggested that I add it to the Smithsonian Institution Research Information System (SIRIS) catalog entry for the Archives Center’s copy of the poster—if we had one—and then to relay it to the Smithsonian repository holding the copy Ms. D’Audney had seen. I didn’t realize that this would turn out to be a complex and confusing task. 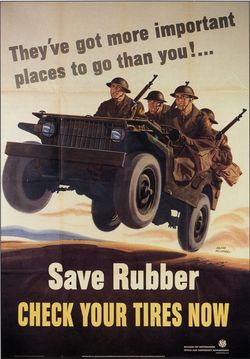 The Archives Center has the Princeton University Posters Collection, containing thousands of war posters, many of which are catalogued in SIRIS, but “Become a Nurse” appears not to be among them. I was surprised, because Ms. D’Audney was correct that this remains a very popular, iconic poster. A Google search revealed that many dealers are selling original and derivative copies of it, both as posters and on clothing (no thongs, however) and tchotchkes like refrigerator magnets. The Archives Center’s Warshaw Collection of Business Americana contains a large group of war posters, but I couldn’t find “Become a Nurse” there either. I then realized that many separate Smithsonian units have war poster collections. I contacted the Division of Medicine and Science due to the nursing angle, but they replied that they don’t have a copy. The Division of Graphic Arts began collecting posters during World War II, but most of those acquisitions were subsequently transferred to the divisions of Military History and Political History. I also checked with the Division of Military History, where it might logically reside. The Division of Political History has war posters, and in 1998 its curators, Larry Bird and Harry Rubenstein, organized an important exhibition, “Design for Victory: World War II Posters on the American Home Front” and its traveling version, “Produce for Victory.” The National Air and Space Museum also collects war posters. It has been suggested that the Army Medical Museum might well have a copy, and that Ms. D’Audney and her family might have seen the poster there, erroneously assuming that that museum was part of the Smithsonian. (At that time it stood where the Smithsonian’s Hirshhorn Museum and Sculpture Garden is now located.)  I tentatively discounted that theory because planes were reportedly hanging near the poster. Tourists might conflate the two museums and misremember airplanes and posters being in the same museum, but I elected to pursue the single-museum theory first. The mystery has just been solved, however. Helena Wright, the Museum’s curator of graphic arts, found “Become a Nurse” on the list of war posters which had been transferred to the Division of Political History.

Ms. D’Audney’s story has been on the Internet for more than two years, so this article is hardly a journalistic scoop. She was interviewed and extensively quoted in the New Zealand Sunday Star Times, April 5, 2008 (“The face behind a famous poster,” author uncredited), based on a memoir she wrote. The article provides the charming story of her postwar marriage to Noel D’Audney, a Royal New Zealand Air Force pilot, as well as her glamorous career as a popular advertising and fashion model. Since the Archives Center has major collections devoted to the history of advertising, it occurred to me that Ms. D’Audney might also appear in our collections of advertisements for Jergens, Lux, and other brand names, but a search produced no definitive results.

The exercise of locating this poster among multiple poster collections interests me from the standpoint of collection access and retrieval. At this writing, the Archives Center’s Princeton University Poster Collection is represented by many paper cataloguing worksheets, not yet typed into SIRIS, plus thousands of completed SIRIS records. Only three of these SIRIS records have links to image files at the present time. A few other posters have been scanned, but have not been linked to SIRIS item-level entries yet. What of the other Smithsonian collections of war posters I’ve mentioned? Some posters undoubtedly have been catalogued into separate databases which do not yet have a public interface like SIRIS. But even if these databases were online, researchers may need to search them separately because they are in separate information “silos,” as we like to say.

The SIRIS office’s responsibilities have widened in recent years, and it is not even officially called by that name anymore.  Yet SIRIS member units continue to use the term, as I shall do here. Through the pioneering efforts of the SIRIS office and their “Collections Search Center,” which facilitates cross-catalogue searches in SIRIS, combined with a growing number of non-SIRIS databases, the barriers of “separate silos” are being eliminated gradually. Some might wonder why the Smithsonian maintains so many separate war poster collections. Shouldn’t they be integrated and housed in one location? That issue is open for discussion, but there are often valid reasons to maintain physical and administrative separations (provenance, anyone?). For the present, the electronic revolution enables us to gather and combine information about separate collections without having to reorganize or relocate them physically. I’m confident that integrated cross-catalogue access and related electronic initiatives will gradually expedite collection searches within this complex, multi-faceted institution.

Many other institutions have major collections of war posters which are searchable online. Until a digital surrogate for the Smithsonian copy of the William Ritter/Weslee Wootten “Become a Nurse” poster becomes available, I took the liberty of copying an image from the University of North Texas Digital Library!