“Physics is phun!” my high-school physics teacher loved to write, and certainly these Nobel Prize winners would agree. Dr. Andre Geim (age 51) and Dr. Konstantin Novoselov (at age 36 one of the youngest Nobel laureates ever) are professors at Britain’s University of Manchester who now share the 2010 Nobel Prize in Physics – and approximately $1.5 million – for “groundbreaking experiments regarding the two-dimensional material graphene.” As the official Nobel Prize press release notes: “Playfulness is one of their hallmarks…one always learns something in the process and, who knows, you may even hit the jackpot.” 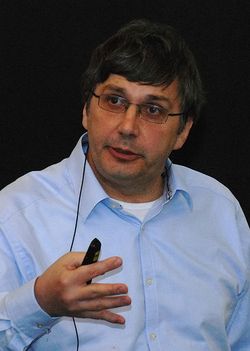 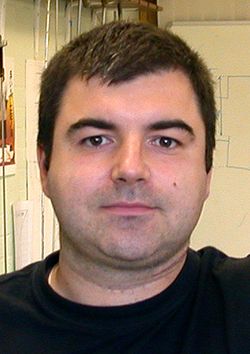 These Russian-born physicists first met when Dr. Geim worked with then-PhD-student Novoselov in the Netherlands. Later they became colleagues when Novoselov joined Geim at the University of Manchester. Geim is proud to be the first individual to win both a Nobel Prize and its parody counterpart, the Ig Nobel Prize, which is awarded for science experiments that “make people laugh first and think second.” He won the latter in 2000 for using magnets to levitate a frog, and is also known for crediting his pet hamster as a co-author on a publication!

Geim and Novoselov enjoy playing around in the lab, especially on Friday afternoons when they like to try fun, crazy experiments. One Friday in 2004 they were messing around, sticking Scotch tape on a block of graphite and pulling up layers of graphite flakes. As they repeated the tape trick, they peeled off gradually thinner flakes. Realizing this might actually have serious consequences, they attached the flakes to a plate of oxidized silicon and under a microscope could see a single layer of graphene. They quickly published their findings in Science, creating much excitement in the scientific community.

Basically, graphene is a form of carbon with amazing properties. It is the thinnest material ever (only one-atom thick, it consists of an almost perfect hexagonal web of carbon atoms). It is about 98% transparent, yet incredibly dense. It is stronger than steel, yet wonderfully flexible. It conducts electricity as well as copper, and it conducts heat better than any other known material. Potentially, graphene could be used in a wide variety of applications, from transistors and computer touch screens to solar cells and extremely sensitive sensors, or mixed with plastics to increase their heat resistance or conduct electricity, or to create lighter, stronger, more flexible composites in cars and airplanes.

There seems to be a trend of Noble Prizes increasingly recognizing applied scientific discoveries, rather than more “pure science,” as was privileged in the past. Here at the Smithsonian’s Lemelson Center we have been very fortunate to work with many Nobel Prize winners whose discoveries have greatly impacted our world, including 1988 medicine laureate Gertrude Elion, 1996 chemistry laureate Sir Harold Kroto, and 1997 physics laureate William Phillips. We have shared their stories through an array of educational outreach activities, from podcasts and videos on our website to our public program series Innovative Lives, as well as a past traveling exhibition Nobel Voices: Celebrating 100 Years of the Nobel Prize. The exhibition led to a special video history project highlighting 33 Nobel Prize winners.

In his Nobel Prize acceptance speech, 1997 physics laureate Steven Chu reminisced that “by the fourth grade, I graduated to an erector set and spent many happy hours constructing devices of unknown purpose where the main design criterion was to maximize the number of moving parts and overall size.” Scientists and inventors we have interviewed since the Lemelson Center began in 1995 often talk about how much they learned from creative hands-on activities during childhood, including playing with construction toys, enjoying arts and crafts, exploring the natural world, and using tools to take apart and reassemble machines. Then they make connections to their playful approaches at work, such as tinkering and “messing about”; visualizing, modeling, and drawing analogies; brainstorming and teamwork; and convergent and divergent problem solving.

The relationship among play, creativity, and invention is the basis for our popular interactive exhibition Invention at Play. One of the featured inventors, Stephanie Kwolek, the Dupont chemist who invented Kevlar, told us, “All sorts of things can happen when you’re open to new ideas and playing around with things.” I think the new Nobel Prize winners in Physics, Andre Geim and Konstantin Novoselov, would concur!

Monica Smith is the Exhibition Program Manager at the Lemelson Center for the Study of Invention and Innovation.