You asked, we answer: What happened to the Pentagon flag from September 11, 2001?

Some of the most frequently asked questions we receive at the museum have to do with objects that were once on display but are no longer on view in the museum. The museum has approximately 3 million objects in its collections, and about 3% of the collection is on view at any one time. The museum also sometimes displays significant artifacts on loan from other museums and historical institutions. One such object that is no longer on display is the giant flag that hung at the Pentagon after the attacks of September 11, 2001.

On Sept. 12, 2001, soldiers and firefighters working the recovery effort at the Pentagon unfurled a giant American flag, draping the west wall of the building, to greet President George W. Bush on his visit to survey the damage. On Oct. 11, 2001, the flag was lowered and folded with full military honors. From September 2002 to September 2006, the garrison flag—on loan from the U.S. Army Center of Military History—was displayed in the museum’s Flag Hall in the space where the original Star-Spangled Banner once hung. 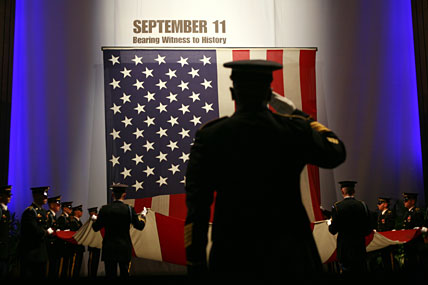 On Sept. 7, 2006, the museum bid a formal farewell to the Pentagon garrison flag to mark the beginning of the museum’s renovation and transformation with an official retreat ceremony. The event began with music provided by the brass quintet from The United States Army Band, known as “Pershing’s Own,” followed by a presentation of the colors by the Joint Service Color Guard from The Military District of Washington and the singing of the National Anthem by Sergeant First Class Lorrie Larson from The United States Army Band. After remarks by the Director Brent Glass and the undersecretary of the U.S. Army, Pete Geren, The Flag Fold Detail of The 3rd United States Infantry, known as “The Old Guard,” began the retreat ceremony, which includes the lowering and folding of the flag. 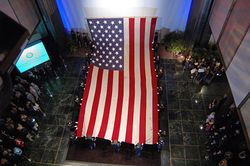 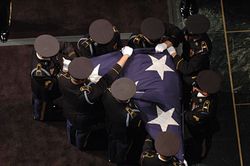 So where is the Pentagon garrison flag now? It has been returned to storage at the U.S. Army Center of Military History at Fort McNair.

To explore the museum’s collection of artifacts, images, and stories that bear witness to the terrorist attacks of September 11, 2001, visit our online exhibition September 11: Bearing Witness to History.

Posted in You Asked, We Answer