Caofeidian: China's city of the future or urban laboratory?

Last year on this blog, I wrote about the development of Dongtan, China’s planned eco-city near Shanghai. Once billed as the world’s first fully realized eco-city—energy-efficient, sustainable, and aiming for a zero-carbon footprint—it was slated to open this year. But the project has run into difficulties and is now reportedly on indefinite hold. China continues to charge ahead on other eco-fronts, however. With more than 15 million people a year relocating from the countryside to the city, China is urbanizing faster than any other nation and is experimenting with urban solutions.

Recently, I attended the China Binhai-Tianjin—International Eco-City Forum, where the Chinese government officially declared the eco-city as the country’s new urban/industrial strategy. Dongtan’s failure notwithstanding, the strategy is rapidly becoming a reality. Besides a trip to the developing eco-city in Tianjin, one of our most eye-opening site-visits was to Caofeidian International Eco-City, about 50 miles south of the port city of Tangshan and somewhat farther from Beijing. Named after an imperial concubine called Cao, Caofeidian is being planned and developed by the Swedish firm SWECO. Construction only began in 2009, but is moving forward at a furious pace toward a 2020 completion date.

The invented ecological city is rising out of seawater and mud being dredged from Tangshan Bay and hauled by endless lines of trucks to create the new land on which the city will rest. Caofeidian will eventually occupy a 45-square-mile coastal portion of a huge new industrial zone. Steel, mining, and oil industries are being relocated from Beijing and other industrial centers. Planners project that the eco-city itself will become home to more than one million residents who will manage and man the industrial sites.

Buildings are sprouting up everywhere amid instant landscaping embedded with solar panels and wind turbines. The larger turbines stand in the bay, and are already transforming wind into electricity. Advertised to prospective investors as “The City of the Future,” the Caofeidian eco-city concept features futuristic buildings by international architects and a monorail designed to alleviate traffic congestion. “Harmony” is a watchword of the town’s boosters, a concept deeply embedded in Confucian philosophy and a slogan now used by President Hu Jintao as the basis for a fair and stable society. A statement from a Caofeidian advertising brochure says it all: “City of the future, City of information, City of ecology, City of happiness.” 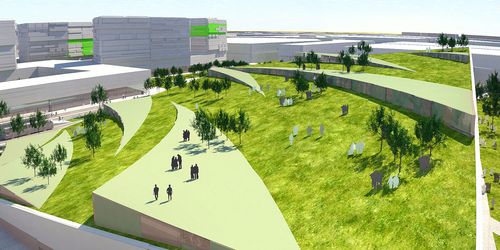 The pace of industrialization and construction today in China is truly breathtaking to behold, compressing into a couple of decades the kind of industrial expansion that America experienced in the late 19th and early 20th centuries (visitors to the Museum can explore the role of transportation in this expansion in the America on the Move exhibition). So, I have every confidence that Caofeidian will be built, at least in its initial stages. Moreover, while it may hit the finish line first, Caofeidian is among several current eco-city initiatives in China. Will they be the ecological promised land as advertised? It will be difficult if not impossible for cities on this scale to achieve energy self-sufficiency and net-zero emissions. However, China also views Caofeidian and cities like it as a unique laboratory of environmental innovation that will guide the retrofitting of existing urban areas, not only in China but in cities globally—offering, perhaps, one answer to the worldwide climate and energy crisis.