Editor’s Note: This post was originally published on Smithsonian Magazine’s Around the Mall blog. Do you have a great idea for visiting the Museum with your class? Share it with us in the comments!

On a recent Thursday morning, 71 eleventh graders from the Field School, an independent middle and high school in northwest Washington, D.C., took a field trip to the National Museum of American History. The museum seemed an obvious choice for an outing—the students, all taking American History, were in the thick of learning about early exploration and colonization. But the assignment six teachers tasked the students with during the visit was refreshingly unconventional. 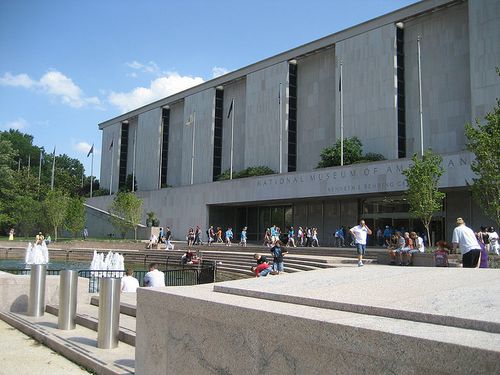 Local 11th graders participate in a scavenger hunt, designed by their teachers, at the National Museum of American History. Photo courtesy of flickr user juco.

Playing to the interests of high schoolers, the teachers supplied the students, divided into groups, with a list of yearbook superlatives—Mr. and Mrs. Congeniality, Most Athletic, Best Couple and Most Likely to Succeed, among others. The students were then given two hours to explore and decide who, of those represented in the museum’s collections, deserved each title. They were also asked to compose a ten-line conversation via text between two historical figures.

“It is always difficult to take historical content and make it relevant to our students’ everyday lives,” says Ryan Reese, an American History teacher and assistant head of the 11th and 12th grades. (Full disclosure: Mr. Reese is also known as Mr. Megan Gambino). “The other teachers and I wanted to have the kids do something that was based on group work and facilitated bonding while allowing them to access the museum’s information in a fun, lighthearted way.” The Field School has received attention in the past for its innovative approach to teaching. Just last spring, theWashington Post reported on an honors philosophy class two faculty members taught through the lens of the TV series Lost.

When it came to “Best Couple,” the Obamas and the Kennedys were popular choices, though there were a few votes for Lewis and Clark. Cheech and Chong were pronounced “BFFs”. Martin Van Buren received a strong push for “Best Hair.” And, in one group, John Wilkes Booth took “Most Likely to Get Detention.”

Kermit the Frog was a favorite in the ‘Best Road Trip Buddy” category. The four North Carolina A&T students involved in the famous 1960 sit-in at the Woolworth’s lunch counter in Greensboro were deemed “Most Likely to Fit in at Field.” And who do you think many of the boys would most like to be stuck with on a deserted island? Marilyn Monroe, of course.

For as cell-phone-happy as many teens are today, the students were oddly fascinated by carrier pigeons, which took home ‘Best Invention” in a handful of groups.

“I’ve done a lot of field trips that involve scavenger hunts. But this one was different because we didn’t have to find specific information,” says one junior. “We had the freedom to explore the exhibits in any way we wanted.”

Megan Gambino is an Editorial Assistant at Smithsonian Magazine