Of the more than 100 photos submitted to the museum’s Star-Spangled Banner Share Your Story Project on Flickr (which is still open for submissions), many represent the lives of men and women who have served our country in the armed forces. In honor of Veterans Day, here is a small sampling of the stories everyday photographers have felt moved to share with us. 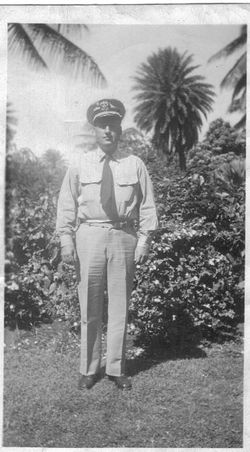 My grandfather
“I never got to meet my grandfather, so I only know him through stories. One thing I do know that I owe him, and many other brave men and women who fought to defend the freedoms I enjoy as an American citizen, eternal gratitude and respect.” (Read more.) 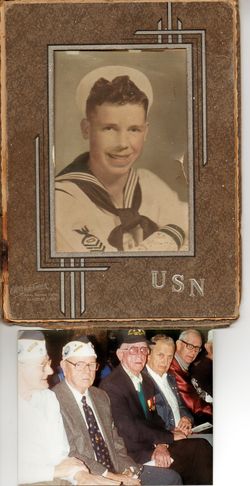 Dad
“My picture is of my father, as a young service man (top picture). Then below that is a picture of him (third from left, in a dark suit) with his fellow Pearl Harbor survivors. My father is the reason I respect and honor our flag. My father was aboard the USSOklahoma on December 7, 1941. He was a crane operator at the time of the attack. My father never talked about his experience, on the day his ship was attacked, when he was younger. As my sister and I grew older, we came to the realization that my father’s love for God, his family and his country were a result of his surviving Pearl Harbor. My father did share his story with us and others, later in his life. When he finally told us, it was one of very few times I had seen my father cry. He spoke of those who did not make it and of those who did survive.” (Read more). 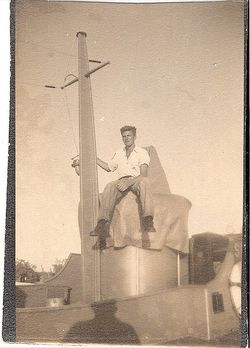 J.R. Womack 1944
“My dad, J.R. Womack, served the U.S. Navy during WW II in the South Pacific. I learned of the meaning of freedom and our wonderful country from him. He was very patriotic and loved the flag. It was only fitting that he passed from this life during the early morning hours of Flag Day, 1993.” 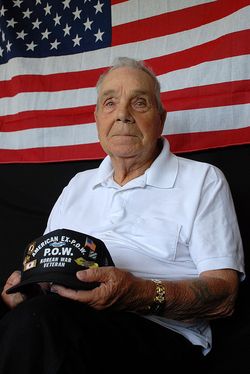 Robert Shimer An American Soldier
“Robert Shimer, an EX- P.O.W. of the Korean war, sat the day this picture was taken with some of his Grand Children , Great Grand Children and myself, his Step Daughter, and told some of his experiences as a prisoner of war. He talked about his pride in the American flag. How it stood for our freedom and how it should always be a symbol of respect and honor. As he spoke of his time as a prisoner I could see the memories flooding back in his eyes . . . I will never look at our flag the same. I will look at it and see the symbol that unites us as a nation. I will see the face of this brave man and the pride in his voice as he spoke about it and the tears in his eyes when he shared his love for it with all the generations in that room that day.” 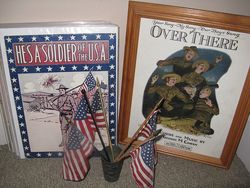 Flag Day
“My Dad was the most patriotic person I’ve ever known. It wasn’t enough that he served in the Army during WWII. After that he collected WWI sheet music and drove his treasured, flag-embellished 1952 MG in parades throughout Northeast Ohio whenever he could. (Sheet music and parade flags are pictured here.) To get us three kids out of bed on Saturday mornings, he would play Sousa marches as loud as he could on the hi-fi. The three of us are still moved at the sound of a patriotic march and a flag flying.” 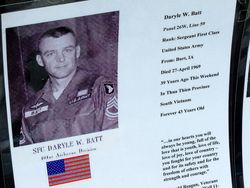 Hero from my Home Town
“I was accompanying my son and his class on a middle school trip to Washington, D.C. Seeing all the monuments in Washington, D.C. and the battlefields of Gettysburg, I was filled with pride for our amazing country and its rich history. On our last day in D.C., we visited the Vietnam Memorial. Imagine my surprise when the first poster setting beside the wall was in honor of a soldier who lost his life in Vietnam from my small hometown of 600 people. He had died 39 years ago that weekend. Thank you to all our servicemen and women for our freedom that we get to enjoy every day.”