A victory for chard

Editor’s note: This post is the fourth in a series of monthly posts exploring the work of Smithsonian Gardens and its relationship to American history.

In previous posts we've introduced you to the National Museum of American History's Victory Garden, which is tended by Smithsonian Gardens. During the summer months, visitors eating in our Stars and Stripes Cafe have a perfect view of the garden’s multi-colored splendor; it is easy to spot peppers, eggplants, tomatoes and even corn. But during winter, a quick look would make you think the growing season is over. There are some grassy “cover crops” and a couple of bare fruit trees, but not much else. But look more carefully! Over to the side and low to the ground are some big green leaves. 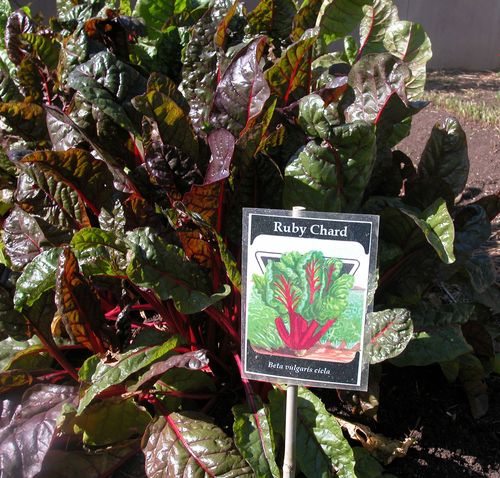 Some of these greens are Ruby Swiss Chard, a leafy green in the beet family. The leaves can be eaten raw, if they are tender and young, or cooked as they grow older and larger. Swiss chard is high in vitamins A, K and C, with one cup containing 214%, 716%, and 53%, respectively, of the recommended daily value. It is also rich in minerals, dietary fiber and protein. 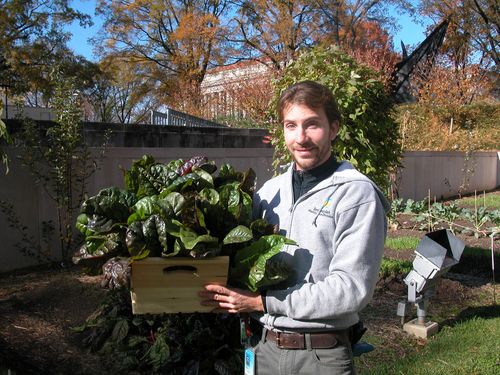 Our Victory Garden is skillfully and lovingly tended by Joe Brunetti of Smithsonian Gardens. Joe and his staff plant chard seeds in mid-August and again in late August, so plants are ready to harvest throughout October and November. The trick is to pick the outer leaves of the plant and leave the new, fresh leaves emerging from the center. These will keep the plant regenerating.

William Bednar, the chef of the Stars and Stripes Cafe, is the happy recipient of the Victory Garden harvest. He was surprised to receive this late fall bonus, but ready to put it to good use. 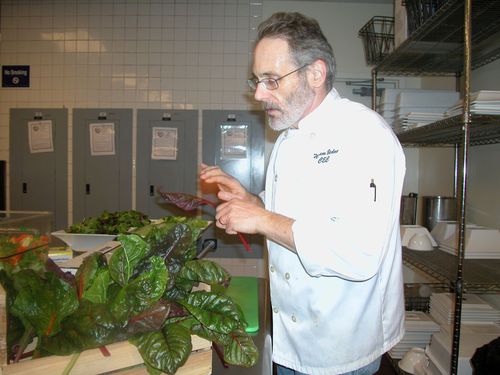 Here is a very simple and delicious recipe for Ruby Swiss Chard, that actually works for any leafy green vegetable: 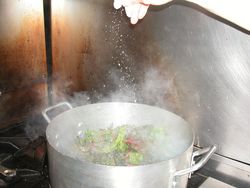 Heat 1 tablespoon olive oil in a medium skillet. Sauté the shallots and garlic until transparent, and season with salt and pepper.

Add the chard and toss well to coat.

There should be water on the chard from washing, but if not, add a little water to create steam.

Season with salt and pepper.

Add one tablespoon olive oil and toss when the chard starts to wilt. Remove from pan.

Place in a serving dish and finish with remaining olive oil drizzled on top. Add a sprinkle of crushed red pepper for an extra kick. 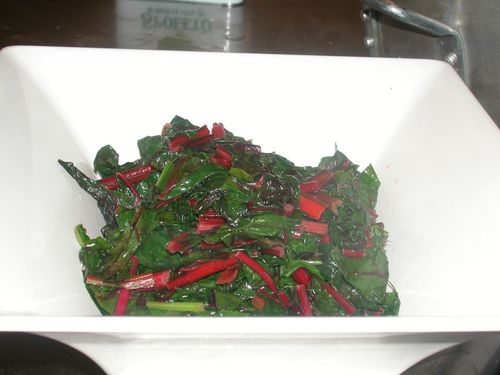 P.S. If your vegetable garden is just a memory, don’t fret. You can get a start on next year’s bounty. November is a great time to clean up any leftover debris from the vegetable garden. Try and remove as much of the diseased leaves as possible so none of the fungi and bacteria will survive over winter and strike again the following year. Also, begin thinking about what to plant next year if it hasn’t already been done. Go online and request free seed catalogs to get inspired.