Race to the Museum: Balzer automobile, 1894

This post is the second in a series of eight profiling automobiles in the museum’s collection. At the conclusion of the series on Tuesday, December 21, the public will be invited to vote for one favorite among the eight cars. The two automobiles with the most votes in the “Race to the Museum” contest will be displayed in the museum from January 22 to February 21, 2011. 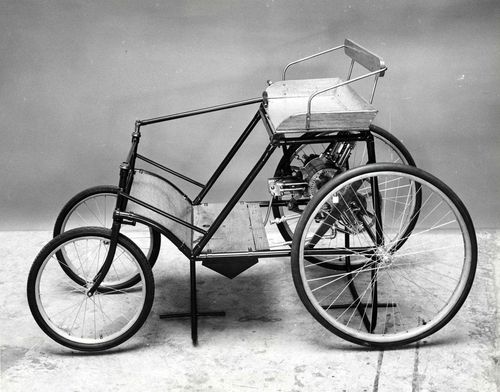 Stephen Balzer traveled in the best circles, both socially and mechanically. Trained as a watch maker at Tiffany & Co., he became a machinist and inventor. He won a gold medal for a register that counted revolutions of mechanisms with a shaft and numbered, toothed wheels. In 1894, Balzer built a vehicle with a gasoline engine that rotated around a crankshaft. He drove the whirring quadricycle into the history books as the first American-made gasoline automobile in New York City.

In 1898, Smithsonian Secretary Samuel Langley hired Balzer to build a gasoline engine for the Aerodrome A, an experimental powered airplane. The following year, Balzer donated his experimental vehicle to the Smithsonian, where it earned another distinction as the first motor vehicle in the collection. Balzer’s rotary airplane engine wasn’t star-crossed, however; it was underpowered and had to be modified by Langley’s assistant, Charles Manly. Despite the improvements, the Aerodrome A flew like a brick, and honors for the first powered flight went to the Wright brothers. Balzer built at least one other experimental automobile and briefly tried to manufacture cars. His 1894 vehicle remains a testimony to his skill—and proof that you can go places simply by going around in circles.