This post is the last in a series of eight profiling automobiles in the museum’s collection. At the conclusion of the series on Tuesday, December 21, the public will be invited to vote for one favorite among the eight cars. The two automobiles with the most votes in the “Race to the Museum” contest will be displayed in the museum from January 22 to February 21, 2011. 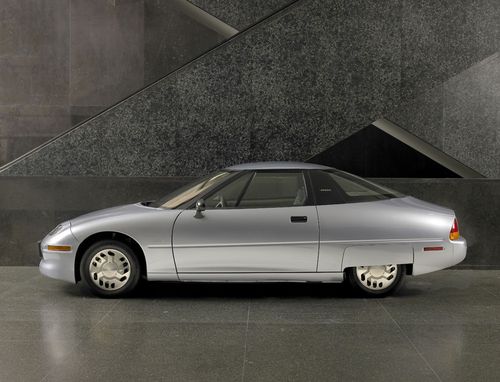 One of the most engaging round table discussions I’ve ever attended took place in 2005 when General Motors donated an EV1 plug-in electric car to the National Museum of American History. Key EV1 personnel recalled the ambitious design, manufacture, and leasing program, which lasted from 1996 to 2004. The challenge was to create a lightweight, aerodynamic, battery-powered car with extended range, one that could also run modern mechanical systems and comforts.

The decision to join the EV1 team was voluntary, and everyone was highly motivated. Team members at the Lansing Craft Centre, where 1,117 electric cars were made, formed strong social bonds and met after work for dinners and picnics. In 2005, some of them showered the museum with stories and tokens of their camaraderie, from EV1 caps, mugs, and name badges to bottles of Electrolite beer. Stories about EV1 lessees are no less fascinating. One driver recharged the batteries with a solar collector, while another used a stationary bicycle. Some drivers connected their Palm Pilots to EV1 power data systems. Although the EV1 never reached the market, battery propulsion technology is now available to consumers with this year’s introduction of the Chevrolet Volt and Nissan Leaf.