This post is the sixth in a series of eight profiling automobiles in the museum’s collection. At the conclusion of the series on Tuesday, December 21, the public will be invited to vote for one favorite among the eight cars. The two automobiles with the most votes in the “Race to the Museum” contest will be displayed in the museum from January 22 to February 21, 2011. 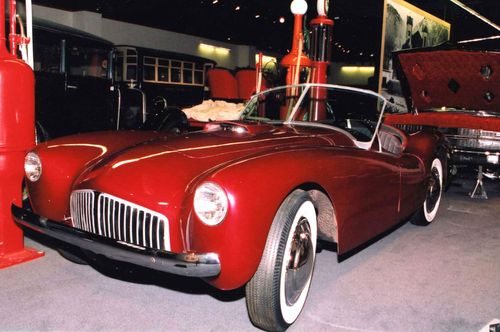 Curves, fun, and low cost—that was the appeal of a Glasspar sports car. Bill Tritt, a California boat builder, began producing American versions of European sports cars as an extension of his fiberglass boatbuilding business. Fiberglass-reinforced plastic (FRP) craft methods made it relatively easy for Tritt to enter the new car market, avoiding a huge investment in dies and presses. The result was spectacular: a sculpted, Jaguar-like creation that appealed to car enthusiasts because of its sporty looks and affordability.

Tritt’s innovation introduced the concept of the personal car and proved that fiberglass—tough, rustproof, and easy to repair—made good car bodies. Tritt advised General Motors on the 1953 Corvette fiberglass-body sports car, an even bigger commercial success. Today a dedicated corps of enthusiasts document the histories and whereabouts of hundreds of Glasspar sports cars built in the early 1950s. One enthusiast, Dale Dutton, generously donated his Glasspar to the National Museum of American History in 1996. I attended a memorable luncheon with Dale and Bill in the museum soon after the car went on display. It’s a rare experience to meet the person who originated any vehicle, especially one that started a revolution.