This post is the seventh in a series of eight profiling automobiles in the museum’s collection. At the conclusion of the series on Tuesday, December 21, the public will be invited to vote for one favorite among the eight cars. The two automobiles with the most votes in the “Race to the Museum” contest will be displayed in the museum from January 22 to February 21, 2011. 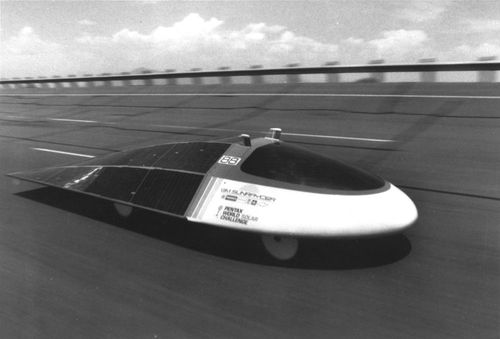 Does alternative energy have a future in personal transportation? Decades of proposals and experiments have made many people wonder whether we will ever drive to the office, shopping center, or Disney World without filling up at the pump. Whether we notice it or not, designers of alternative energy vehicles are constantly rolling out new types of experimental vehicles that push the envelope a bit further.

Take the Sunraycer, for example. In 1987, General Motors accepted the challenge of entering a 1,864-mile solar car race across Australia. GM partner AeroVironment, founded by human- and solar-powered aircraft innovator Paul MacCready, designed and assembled an amazingly lightweight, aerodynamic solar-electric vehicle with a body made of Kevlar and Nomex, satellite-type solar cells, silver-zinc Hughes batteries, and a GM Magnequench motor. The tubular aluminum body frame weighs an incredible 14 pounds, and total weight is just 390 pounds. Sunraycer could achieve speeds up to 70 miles per hour and won the race hands-down.

Will motorists ever drive cars like the Sunraycer? Maybe. But more importantly, Sunraycer’s power control technologies paved the way for other types of electric vehicles that are closer to becoming everyday transportation.