Race to the Museum: Long steam tricycle, about 1880

This post is the first in a series of eight profiling automobiles in the museum’s collection. At the conclusion of the series on Tuesday, December 21, the public will be invited to vote for one favorite among the eight cars. The two automobiles with the most votes in the “Race to the Museum” contest will be displayed in the museum from January 22 to February 21, 2011. 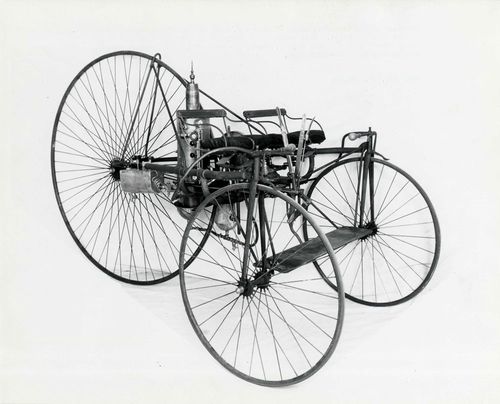 What’s made of bicycle parts, weighs 350 pounds, and is self-propelled? Not your typical 1880s vehicle. Before George Long, a carpenter in Northfield, Massachusetts, built this one-of-a-kind experiment, he and other inventors built heavy, steam-powered wagons. So why switch to thin, spidery body materials? Long borrowed technologies developed for the high-wheel bicycle craze, which was just taking off. Bicycles were lightweight; for Long’s three-wheel wonder, a tubular steel frame and spoke wheels meant a better power-to-weight ratio and easier travel on rough dirt roads. Adult-size tricycles were safer, more comfortable, and easier to mount than high-wheel bicycles, so Long’s vehicle pointed the way toward practical, powered road transportation.

Unfortunately, Long’s horse-owning neighbors didn’t appreciate his meanderings in the strange contraption, and Long dismantled it. He received a patent in 1883, and although the steam tricycle never entered production, Long, who lived until 1952, was celebrated as an American automobile pioneer. John Bacon, a steam vehicle collector and historian, reassembled the Long steam tricycle and placed it in the Smithsonian. Today it is a treasured time machine from an era when Americans conceived of alternatives to trains and horses.