This post is the fourth in a series of eight profiling automobiles in the museum’s collection. At the conclusion of the series on Tuesday, December 21, the public will be invited to vote for one favorite among the eight cars. The two automobiles with the most votes in the “Race to the Museum” contest will be displayed in the museum from January 22 to February 21, 2011. 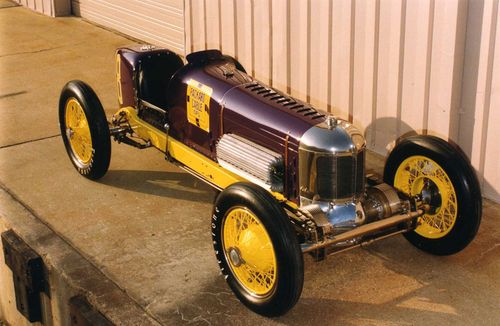 Ever dream of being the only kid on the block with super powers? Harry Miller’s eight-cylinder, supercharged, front wheel drive race cars hit the tracks in the late 1920s, and the dozen demons were unlike anything the competition could offer. Light and fast, the aluminum-body Miller car in the collection of the National Museum of American History weighs 1,400 pounds and develops 230 horsepower. It was driven by Ralph Hepburn in the 1929 Indianapolis 500, and although he didn’t win, the same car later set speed records in Europe.

There were enough loopholes in American racing rules to permit such extravagant power, but that didn’t last long. “The Detroit car makers threatened to pull out of the Indy 500 because it was too expensive to compete with the hand-crafted ‘high tech’ of the exotic Harry Miller cars,” said National Museum of American History curator Bill Withuhn, who received the Miller car as a gift of Robert Rubin. “The track owner and Indy organizers changed the rules to outlaw superchargers and to change the size of engines permitted in Indy cars. End of Miller dominance; welcome back, Detroit sponsors.” Rubin’s gift includes a fund to keep the Miller race car in running order.