This post is the third in a series of eight profiling automobiles in the museum’s collection. At the conclusion of the series on Tuesday, December 21, the public will be invited to vote for one favorite among the eight cars. The two automobiles with the most votes in the “Race to the Museum” contest will be displayed in the museum from January 22 to February 21, 2011. 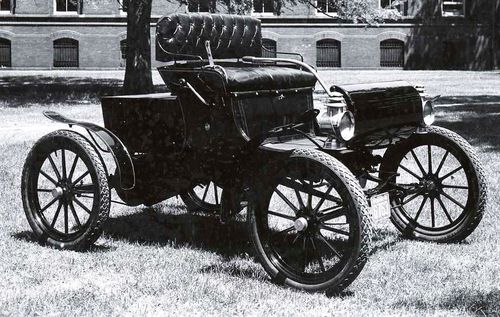 Ransom Olds ushered in the twentieth century by starting volume production of automobiles, transforming them from expensive toys to affordable transportation for the middle class. His curved dash runabout of 1901-1905 was a runaway best seller. His factory was the first to build cars on an assembly line—not a moving conveyor, as Henry Ford would install a decade later, but a parade of partially-completed cars swiveling from one work station to another on dollies.

Oldsmobile runabouts were produced by the thousands, and they endeared themselves to their owners. The make even became a household word; who hasn’t heard the hit song “In My Merry Oldsmobile,” with its slightly risqué lyrics about romantic combustion between two young people out for a spin? Almost overnight, driving became woven into American social customs and popular culture. And Olds introduced style to mass-produced cars; the graceful curved dash was supposed to resemble the front of a sleigh.

The Smithsonian’s runabout was built in the same year that Henry Ford entered the car-making business, but Henry’s Model T was five years in the future, and Oldsmobile ruled the road.