Fifty years ago, the Kennedys became the first family

Richard Avedon photographed president-elect John F. Kennedy and his family fifty years ago on January 3, 1961. The Museum has just opened a small exhibition with some of these photographs. One of the special features of this exhibition is the contact sheet in which the visitor can see which images were made and which were not selected by the photographer. We usually only see the final result and it is a rare opportunity to see a photographer’s process from beginning to end. In this blog you can see the contact sheet, an image as it appeared in Harper’s Bazaar in 1961, and a final print in 1965.

A presidential candidate’s wife plays an important role in shaping her husband’s perceived image. Jackie Kennedy had quietly accepted advice from Harper’s Bazaar editor Diana Vreeland as part of an effort to indicate the modern, youthful nature of the candidate. As a way to say thank you, Jackie volunteered to be photographed for the magazine. Jackie had appeared in the fashion magazine before, twice photographed by Richard Avedon, so it wasn’t highly unusual when the Kennedys were featured as the first subject in series of photo essays by Avedon. 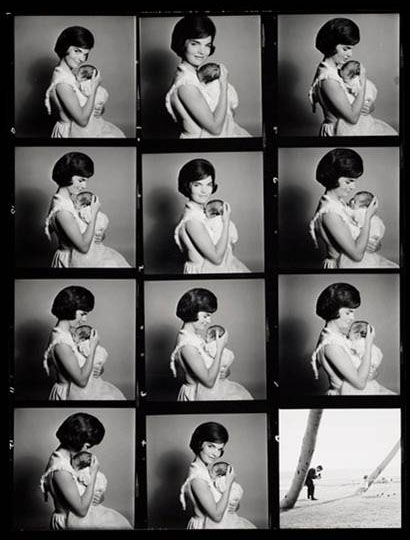 Avedon traveled to Palm Beach, Florida where the photo session took place. There Jackie was recovering from the birth of John, Jr., while the Kennedy home swirled with pre-inaugural activities. The contact sheet seen here shows the president-elect’s wife in various poses, isolated from the hub-bub of hair dressers, friends, secret service and speech writing, with her five-and-a-half week old baby. Examine the contact sheet. Which image would you choose?

Did you select the one in which Jackie is smiling? Avedon didn’t. For the magazine he selected an image in which she is holding her newborn gently with one hand, firmly with the other. She is not engaged with the viewer, but rather seems to be focused on something else, perhaps contemplating the future of her children. The photograph is the third in a series of six images, and is paired with photograph of Caroline holding her brother. For the magazine reader, this might suggest the centrality of family, and the first lady’s role in nurturing the next generation. 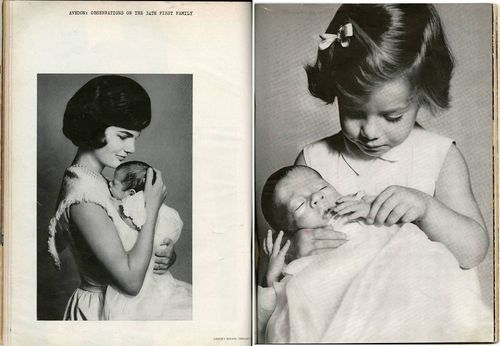 The image Avedon chose to print and mount on the large black board is one in which Jackie is looking at the viewer, but again she is not smiling. This image was printed for the Museum’s collection in 1965, after the death of her husband. Perhaps Avedon was thinking of her protective and serious commitment to her children when it entered the national collections. 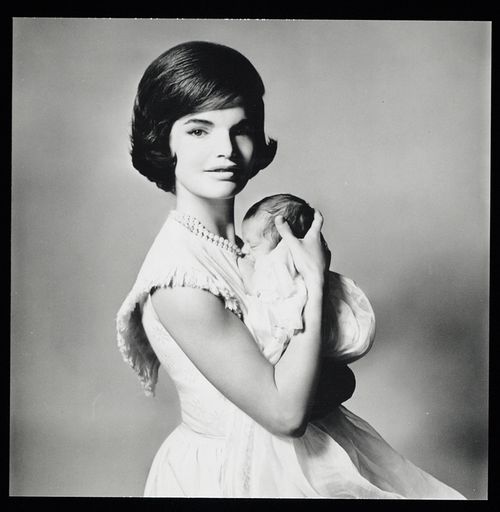 You might be wondering about the photograph in the lower right corner of the contact sheet. It is the photographer beginning a second photo session for LOOK magazine. Kennedy may have agreed to participate in the fashion magazine session, if a second could be secured that would show the president-elect in his, not the photographer’s, preferred public persona full of action and vitality.

This photograph is among others that were featured in the book The Kennedys: Portrait of A Family. You can also learn more about the photo session and the photographs at NPR, a SITES blog, and a Good Morning America interview. A selection of the images are on view at the Museum through February 2011.