In my last blog post, I took you on a brief tour of the Eco-City scene in China, in the northern area around Beijing. I wish, though, that I had been able to travel south to Shanghai to visit World Expo 2010, which closed at the end of October. Its theme of “Better City, Better Life” featured the Eco-City among technology-driven urban futures, not only in China but globally. World’s fairs, at least for the past century or so, have been all about material progress and imagining technological futures, and the one in Shanghai was no exception. 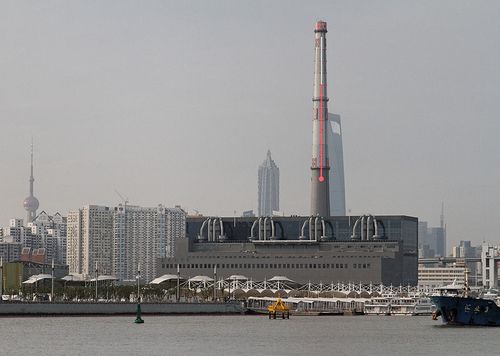 Pavilion of the Future" at World Expo 2010 in Shanghai. Photo by Kimon Berlin, Wikimedia Commons.

This idea of “inventing the future” was loudly voiced in the early 1900s by the emerging Modernist movement. Two of the cruelest realities of early Modernism were the First World War and ensuing Great Depression. Clearly, the future seemed a better place (if you didn’t foresee the coming of the next world war just down the road). The future itself became a place of invention, in large part because it freed one from the shackles of present reality.

A virtual tour through the World Expo 2010 website offers evidence of this continuing theme of inventing the future. I was most fascinated by Zone E, containing the “Pavilion of the Future,” where visitors were invited “to imagine what cities will be like in the future.” Prospective scenarios were represented in five “dreamlike street settings”—Ecological City, City of Wisdom, City of Water, Space City, and City of Energy. Among the possibilities presented were Low-Carbon City and Harmonious Environment, the latter a testament to the Chinese recognition of the “spiritual elements that have always driven human progress.” Similarly, the SAIC (Shanghai Automotive Industry Corporation)-General Motors pavilion looked at how vehicles will change cities in 2030, predicting a new role for the car, scientifically redesigned to meet future energy, environmental, and communications needs. The car is seen as bringing people face to face, not virtually, but physically, thus becoming an “emissary for love.” I liked this chaste view of the car’s romantic possibilities.

One of the official guidebooks to the 1939 New York World’s Fair, on display in the Science in American Life exhibition at the Museum. Courtesy of Division of Medicine and Science, National Museum of American History.

Shanghai’s World Expo 2010 was clearly in the grand tradition of the 1939 New York World’s Fair theme of “World of Tomorrow.” There, too, the automobile took center stage with the famous theme ride created for the General Motors Corporation by industrial designer Norman Bel Geddes. “Futurama” gave visitors a picture of the car-dominated—but traffic-free—world of 1960 as they glided in speaker-equipped armchairs over an enormous model of rural land- and cityscapes dotted with Modernist skyscrapers, interlaced by multilane highways coursing through country and city alike that cleared away slums and derelict industrial sites in their paths. Showing some prescience, cars were equipped with radio transponders to maintain safe distance between each other, while special flyways put them above and out of the way of pedestrians and buildings. Though self-driving cars are now appearing in an experimental way (notably, the driverless Google Car), it is amazing how much of Futurama’s scenario actually came true.

Visitors on the Futurama II ride at the 1964 New York World’s Fair. Still from a film, courtesy of captainlarrydart and YouTube

So successful was this exhibit with visitors that Futurama II was created for the 1964 New York World’s Fair (built on the same site in Queens as the 1939 fair). In this space-age exhibition about “man’s achievement on a shrinking globe in an expanding universe,” “tomorrow” is sixty years into the future in 2024. Now the ride offered visions of life deep beneath the sea, in the Antarctic, in outer space, and even on the moon. Hovering satellites looked down at earth and “lunar rovers” roamed, looking amazingly like what eventually came to pass. Films shown at the fair foretold endless material progress through mineral discoveries and agricultural innovations in these new frontiers on and beyond earth. This fair also had the benefit of the imagination—and animatronics—of Walt Disney, no mean inventor in his own right.

Carrying forward this tradition, Matt Groening (the mad genius behind The Simpsons) named his acclaimed animated series Futurama after the original world’s fair attraction. It is set in New New York at the turn of the 31st century, where robots live among us humans, albeit sometimes uneasily. But, important to note, the four-wheeled car, so important to past Futuramas, has mostly disappeared, replaced by jet-powered personal vehicles, hovercraft, and a network of tubes that transport people instantly from place to place.

Yes, rest assured that a thousand years from now the future will still be a place of invention.