The 1915 San Francisco Panama Pacific International Exposition was an international fair held to celebrate the opening of the Panama Canal. Planning began in 1904 and the Exposition was also seen as an opportunity to demonstrate the city’s recovery from the 1906 earthquake. When it closed in December 1915, it had attracted almost nineteen million visitors.

In 1915 color photography was still in its infancy and the selected images shown below are from a collection of over 500 Autochromes in the Photographic History Collection at the National Museum of American History.

A number of successful attempts at color photography were made in the late nineteenth century, but they required specialist knowledge and equipment. In 1907, the Lumiere brothers, Auguste and Louis, announced the Autochrome process that could produce color photographs with a standard unmodified plate camera. The process became popular with professional and advanced amateur photographers and remained in use until it was supplanted by color films such as Kodachrome in the 1930s. The Autochrome is similar to a color slide, in that there is no negative and they have to be backlit. The color dyes are held in place by potato starch medium that is a challenge to preserve.

About forty images in the Photographic History Collection of Autochromes were taken at the Panama Pacific Exposition by an unidentified maker. Most of them retain the full range of colors present when they were first made. Scans of seven of the recently found Autochrome color photographs are presented below. 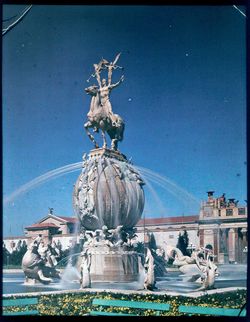 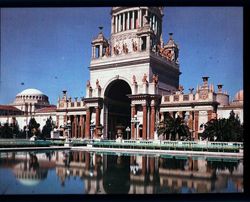 The Fountain of Energy stood in front of the ornate Tower of Jewels, the centerpiece of the exposition at the main entrance of the Panama Pacific Exposition, and most popular exhibit. The tower was 435 feet high and adorned with more than 100,000 glass “jewels.” The lower part of the tower is shown in the Autochrome above.

These Autochromes give a realistic idea of the colors used for exposition. The image below shows part of the interior courtyard of the Tower of Jewels and the pastel color scheme that had to be followed by all the fair pavilions, including murals and sculptures. 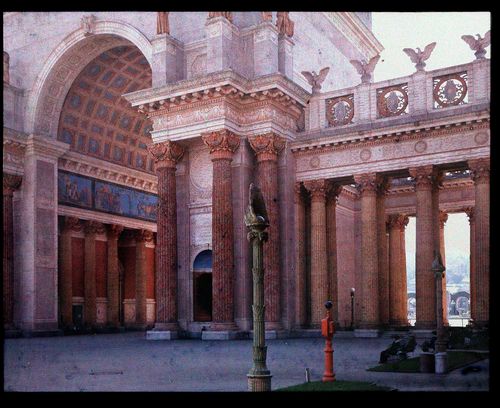 Interior of the Tower of Jewels.

Very few of the Autochromes show people in the photographs. The slow speed of early color plates limited photographs to static subjects, especially for interior shots. However, the lack of people in these Autochromes suggests they were taken before the fair opened to the public. Some of the photographs appear to show incomplete construction work, for example, the foreground of this Autochrome of the Siamese Pavilion. Siam (now Thailand) was one of twenty-four foreign countries represented at the exposition.  Even the colors of the many flowers beds at the exposition were chosen to match the mandatory color scheme. The second Autochrome, below, shows flowers beds in front of the arch of the nations of the west in the court of the universe. 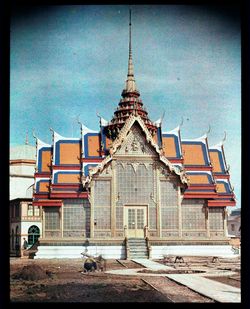 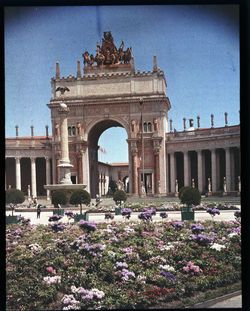 Left: The Siamese Pavillion Right: The Flower beds at the Arch of the West

The outbreak of World War I in 1914 affected international participation. Most notably, Great Britain and Germany cancelled plans to attend. However, some of the belligerent nations did come, including Italy. The next image shows the courtyard from the Italian Pavilion. 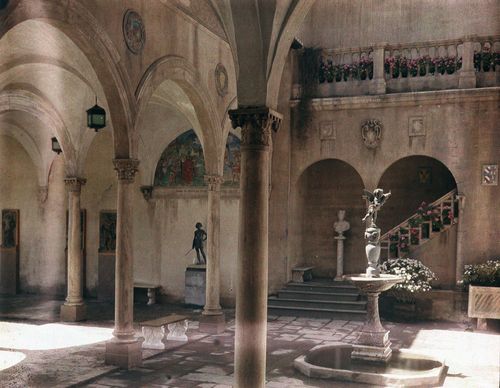 The exhibition was intended to be temporary. The buildings were made of wood, plaster, and burlap to make them easy to demolish. The only part of the exposition to survive was the Palace of Fine Arts which was rebuilt in the 1960s from more permanent materials. Today the building houses the San Francisco Exploratorium. 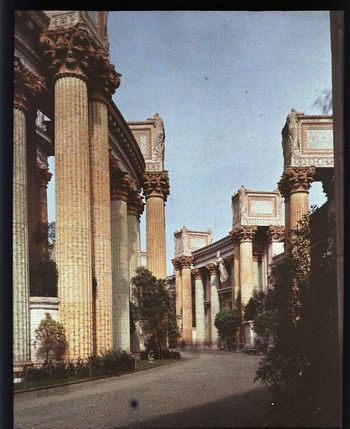 Anthony Brooks is a volunteer in the Photographic History Collection at the National Museum of American History.