The National Museum of American history boasts what may be the world’s largest and finest collection of historic water meters—108 in all, each one made in the United States. Most of these meters came to the Smithsonian in 1965, a gift from A.A. Hirsch of Shreveport, Louisiana. An odd collection, perhaps, and yet an important one, reminding us of such key aspects of the American experience as the development of public water works and the related concern with water conservation. As there have been many hundred water meter patents, the collection calls attention to American ingenuity. And the history of water meter manufacturers and water meter scandals indicate the large sums of money to be made from urban infrastructure.

Except for a few early prototypes—namely that discussed by Frontinus in ancient Rome, and that designed by Leonardo da Vinci in the early sixteenth-century—the water meter story began in the early nineteenth century and expanded along with the growth of urbanization and industrialization. Water meters are conceptually simple but difficult to execute. Thus, a well-informed commentator observed in 1870: “Measurement of water flowing through pipes, under any and all circumstances of position, pressure, and velocity, has, perhaps, more difficulties than any other with which the modern mechanic can grapple.” Another observed in 1885: “Notwithstanding the demand the effort made by inventors to meet these desiderata, such marked success has not been attained as to make it a universal custom to sell water by the volume.” That situation, however, was soon to change as inventors devised meters that were accurate, reliable, durable and relatively inexpensive, and that would measure low flows as well as gushers. 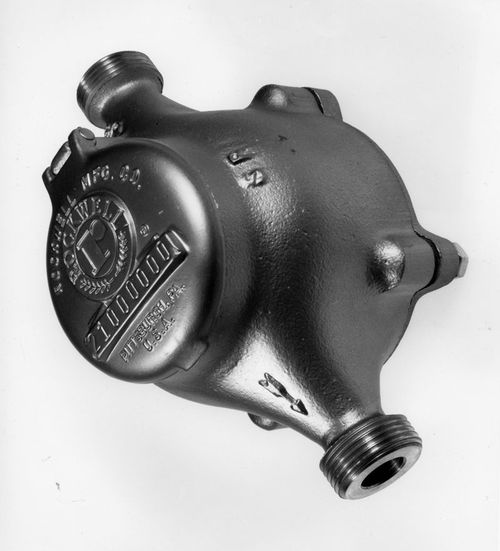 This modern meter from 1971 is the 21 millionth meter made by the Rockwell Manufacturing Company.

The museum’s oldest meter is a Worthington duplex piston, serial number 55,542, that was probably made in the 1890s, and is a late example of America’s first successful meter. The form was designed, patented (in 1855), and produced by Henry R. Worthington (1817-1880), a New York manufacturer of pumps and other hydraulic machinery. The museum’s most recent meter, a 1971 gift from the Rockwell Manufacturing Company in Pittsburgh, features a sealed register magnetic drive that, according to the donor, kept the register clean, dry, and free from fog. It was also the twenty-one millionth meter made by that firm. The meters in between represent all the major American makers and most of the major forms.

Deborah Warner is a curator in the Physical Sciences Collection at the National Museum of American History.