Late last year, I was speaking with a curator for a museum of Masonic history and our conversation turned to America’s most famous Freemason, George Washington. A potential donor had come to him offering a Masonic apron that he insisted had once belonged to Washington. The curator examined it and explained that, sadly, the apron couldn’t have belonged to our first president. His first clue? George Washington himself was pictured on the apron.

Unfortunately for museums, identifications aren’t usually this straightforward. When the National Museum of American History was recently offered its own Washington apron (see Part 1), curators and conservators from across the museum were called on to examine the object, lending their considerable experience and judgment to the question of its authenticity. The application of this collective connoisseurship is often enough to unravel the story behind an enigmatic object, but it can also have its limits. 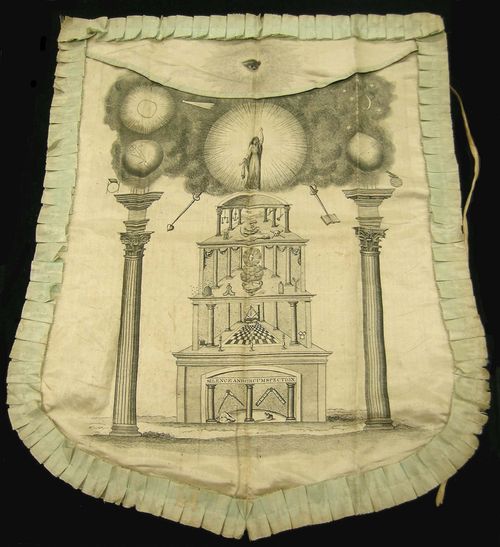 Curators and conservators from across NMAH weighed in on the question of whether this Masonic apron could have belonged to George Washington.

A representative for the prospective donor delivered the apron to the museum, met with our staff and presented the object for examination. As there was no documentary evidence to support the donor’s family tradition that George Washington had once owned it, the key would be in dating the apron. Place it between 1752 (the year he became a Freemason) and 1799 (the year of his death) and there would be at least a possibility the apron could have been Washington’s. There was doubt about this, even at first glance, but as curators inspected the apron more closely, a firm date remained elusive.

Textile curators and conservators immediately determined that the apron was made of silk. Silk Masonic aprons do exist before 1800, but they became far more common in the 19th century. Curators specializing in printing history pointed out that the design was printed on the silk rather than painted or drawn. This technique, called intaglio, involves printing with ink on an engraved plate or roller. Intaglio printing was indeed practiced in the late 18th century, but is more widespread after 1800, especially in Masonic aprons.

I wanted to know more about the design, and who had created it. Some of the individual symbols in the printed design pointed to a post-1800 date. An influential Mason named Thomas Smith Webb popularized an American version of Freemasonry, known as the “York Rite,” in the early 1800’s. He invented a number of symbols and motifs, such as the sword pointing to a heart, not seen in 18th century Masonic decoration. But Webb’s original work, The Freemason’s Monitor, had been published in the mid-1790’s, a few years before Washington died. 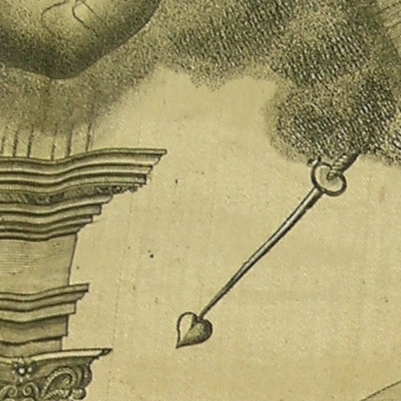 Masonic symbols such as the sword pointing to a heart became widespread in the early 1800’s.

The design and printing technique turn out to be similar to a printed apron in the Museum’s collections engraved by Edward Horsman of Boston around 1814. The apron’s design also closely matches one created by the Connecticut engraver Thomas Kensett around 1812. Kensett’s design, depicting a tiered temple flanked by two pillars and overloaded with Masonic symbolism, proved so popular that it was “borrowed” by other engravers. Though not exactly Kensett’s design, our apron had the same overall design and could easily be one of these copies. 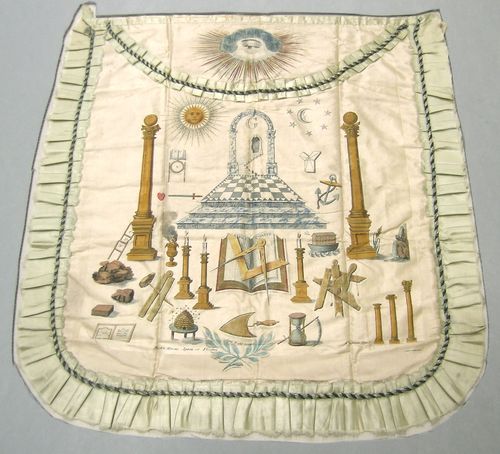 Part of the Museum’s fraternal collections, this elaborate apron belonged to Sidney Mason, America’s first consul to Puerto Rico, and dates to around 1822. The printed design was created by Edward Horsman of Boston in 1814.

We certainly had an increasingly convincing case against George Washington’s ownership of this apron. But with so much of the evidence straddling the key date of 1799, we still had to prove that case beyond a reasonable doubt. To do this, the apron would have to go under the microscope.

Editor’s Note: Stay tuned for the third and final part of this curatorial mystery in the coming weeks!

Timothy Winkle is an Associate Curator in the Department of Home and Community Life at the National Museum of American History.